The conversation with former stuntmen Emil Mikulyan and Luka Knezhevich took place in June 2014 in the foothills of the Croatian mountain range Platak (Platak) at the legendary location of the Shoshone camp from the film “Frontier Hellcats” (Unter Geiern), filmed by filmmakers of Germany and Yugoslavia in 1964 The conversation turned out to be a mixture of German and Croatian ... 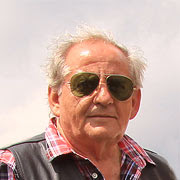 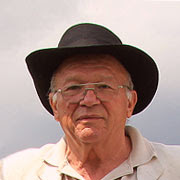 Dear Luke and Emil, tell us how you got into the cinema in general and tales based on the novels of Karl May in particular?

Mikuljan: It all happened in Zagreb. We were found at the local hippodrome. My first film, where I acted as an extra, turned out to be Italian. It began with the Italians needing horses. More precisely, they had horses, but there were no good riders. Then they gathered us, 10-12 Zagreb guys, and asked if we could ride a horse well? We said yes. Then they announced to us that in the film we would become horsemen. So it all began in 1959. I mean the Italian-French-Yugoslav film “The Battle of Austerlitz” with Jean Marais and Claudia Cardinale. Then came the Italian films: “The Terror of the Barbarians” (Il terrore dei barbari, 1959), “The Abduction of the Sabine Women” (Il ratto delle sabine, 1961), “Julius Caesar” (Giulio Cesare il conquistatore delle Gallie, 1962), “Samson vs. Tyrant ”(La furia di Ercole, 1962),“ Taras Bulba ”(Taras Bulba, il cosacco, 1963) and a few more Italian historical films. Basically, we depicted warriors or soldiers who raced on horseback.

In 1962, the Germans came to Yugoslavia to shoot Karl May. From that moment we began to be stuntmen: You forgot to mention our film “The Nevesin Gun” (Nevesinjska puška, 1963). We had a lot of work there too. (* Luka Knezhevich is referring to the famous Yugoslav historical film Jika Mitrovich, which tells about the Bosnian uprising against the power of the Turks in 1875 - Comm. Big Chief) 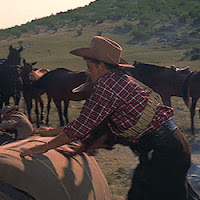 Emil Mikulyan in the movie "Treasure of Silver Lake" (1962). 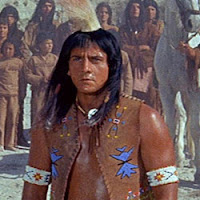 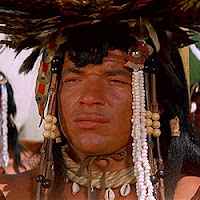 
Stunts and supporting roles were played by many veterans of "mayevok". Mikha Baloch and Vladimir Medar included ...

Mikulyan: Yes. And Marad also Taras Bulbu played in the same film. True, he didn’t know how to ride a horse at first. A specially selected horse and an individually made saddle were prepared for him.

Knezhevich: It is worth remembering the “Nepokoreni grad” (Nepokoreni grad) ... (* This TV film, several series of which were devoted to the events in Zagreb at the beginning of World War II, was filmed for Yugoslav television in 1981. - Note. Big Chief) Mikulyan (laughs and shows a colleague): There were other films. He remembers all these names better than me.

All the same back to our main topic. Which of the West Germans was the first for you?
And which of the films on the novels of May is the best for you?

Mikulyan: For me ... Hmm, probably, it is ... nevertheless "Among the Kites". I emphasize for me. Now I will explain - why. The director of the film was Alfred Vohrer and, in my opinion, he had a greater grasp than Harald Reinl. He rebuilt a lot of things. He demanded more professionalism from us, stuntmen. And if we did something well, he always found time to praise us personally. Harald Reinl treated us very differently. Reinl often communicated with us through assistants, but Forer did not, he always wanted to do everything himself.

Knezhevich: I have a photo where he, along with us, carefully inspects everything in the driver's cab before filming. And next to him are Stipe Delić. (* This is about the scene of an attack on a train from the film “Flaming Frontier” (Old Surehand, 1965). Stipe Delić - Forer's assistant and director of filming from the “Core Film”. - Approx. Big Chief)

Stipe Delić (left back), Alfred Forer (second left), Emil Mikulyan (with his back in a fireman's cap), Luka Knezhevich (with a cowboy hat) on the set of the film "Flaming Frontier * Photo from the archive of Luke Knezhevich

What can you say about the main stars? I mean Pierre Briece, Lex Barker and Stuart Granger.

Mikulyan: With me personally, Stuart Granger was very friendly. Pierre Brice, you know, something like that ... he didn’t really look for contact with us. Well, Lex Barker - and even less. 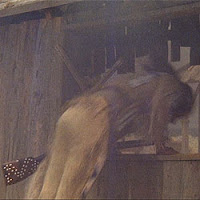 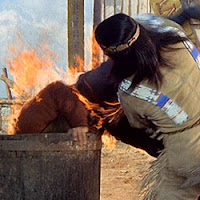 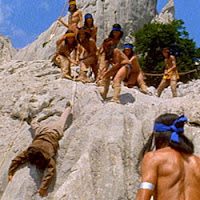 Have you doubled any of them?

Mikulyan: It was the case. For example, in Winnetou and the Half-Breed Apanachi (Winnetou und das Halbblut Apanatschi, 1966) I did something for Pierre Briece. I jumped out a window instead of him. At first we had a duel with him. Remember, a burning man in a barrel of water? After that there was a command: “Stop!” The next scene is a leap out of the window with a roll that Winnetu should do. He does it, only it was me. On screen, after installation, everything went in the reverse order.

At this point, our conversation unexpectedly broke off. The fact is that at that moment, in the very center of the former Shoshone camp, finally, the one everyone was waiting for — the leader of Vocade  himself! Or rather, Gojko Mitic, the legendary singer and the Shoshone leader in the film “Frontier Hellcat”. Remembering the events of 50 years ago, Sporty Goyko, as always, pleased us with his sparkling humor. But more about that another time.

The conversation was led by Big Chief
Posted by Tom B. at 7:08 AM