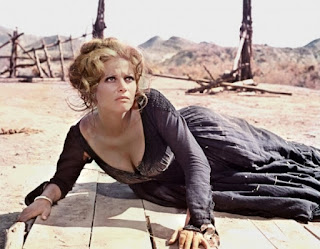 Spaghetti westerns were never too progressive in their depiction of women characters, but Claudia Cardinale’s role at the centre of Sergio Leone’s epic Once upon a Time in the West is more complex than might first appear, says Christina Newland.

ountless column inches have been spent in odes to the voluptuous beauty of Claudia Cardinale. The Italian-Tunisian bombshell was compared with Bardot, called “‘Italy’s happiest invention” by co-star David Niven, and became a breakout arthouse star of the 1960s. Her almond-shaped eyes and feline prettiness undeniably shaped the roles she took on. Cardinale was the sexy vision of marriageable peasantry in Luchino Visconti’s The Leopard (1963), the phantom ‘ideal woman’ of Marcello Mastroianni’s dreams in 8½ (1963) and the well-coiffed princess in The Pink Panther (1964).

Few would assume that Sergio Leone, the lauded but thoroughly macho director of the Dollars trilogy, would come along and alter Cardinale’s on-screen depiction as a romanticised but earthy screen goddess. But the maker of classic spaghetti westerns seems to have met his match with Cardinale, and her role as the moral force of Once upon a Time in the West (1968) would prove to be an interesting departure from some of her idealised previous roles – even if only slightly.

Leone’s arid, dusty epic is set during the waning days of the American frontier, as an encroaching railroad is set to be constructed over a valuable tract of land known as Sweetwater. This property is sought after by the cruel outlaw Frank (Henry Fonda), who cheerfully murders the property’s rightful owner and unwittingly leaves the man’s widow, Jill McBain (Cardinale), the sole inheritor of the land.

Threatened on all sides and seemingly helpless to the vagaries of the violent men around her, Cardinale’s woman refuses to be cowed. She bravely defends her late husband’s property, even after a brutal implied rape takes place. When hero Harmonica (Charles Bronson) strides into town to enact revenge on Frank for separate reasons, he too is drawn to Jill, and strives to protect her and her land from the sadistic bandit. Finally, Cheyenne, the local criminal framed for her husband’s murder (Jason Robards), also circles around the woman, leaving her in a precarious and complex situation. 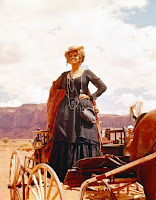 On the face of it, it’d be easy to make the argument that Cardinale’s role in the film is not especially progressive. A former prostitute, without the protection or respectability afforded her by her husband, she’s a piece of meat for the taking in Leone’s conception of the old west. It almost goes without saying there are pretty clear limitations on the feminist credentials of most 60s spaghetti westerns. A survey of Clint Eastwood’s oaters of the 70s also reveals some shockingly misogynistic moments, and at the very least a kind of paternalistic gender structure falls into play.

In Once upon a Time in the West, the threat of sexual violence is nearly omnipresent, which sits on a faintly discomfiting line between historical reality and artistic licence. For Leone particularly, questionable depictions of rape dogged him through his career. In his decade-spanning gangster film Once upon a Time in America (1984), one of the most disturbing and arguably dramatically unnecessary rape scenes committed to celluloid takes place. Although a whole article could be devoted to the sexual politics of that film, it’s evident that Sergio Leone was not forward-thinking on the subject. As with many directors before and after (from Luchino Visconti straight through to Abel Ferrara), rape is treated as a motivator for male protagonists rather than a crime visited on women. 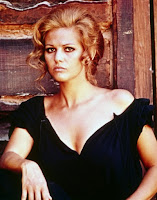 It may be that Cardinale’s imperilled pioneer widow is empowered only by a matter of degrees, stuck in a dirty and dangerous frontier that frequently made victims of its more vulnerable inhabitants. But she is the overruling force at the centre of the narrative, not so much the sole driver of plot but one whose appraisal of the actions of the violent men around her matter deeply to the narrative.
It’s through Jill’s eyes that we survey the emptiness of their machinations, the needless bloodshed at their hands, the greed that Leone is so intent on underlining. Her affection for Harmonica and for the unfairly framed Cheyenne (Jason Robards) gives them credence. There is an archetype for a role like this one, and perhaps in some ways it’s as inflexible as putting her on a goddess-like pedestal. Leone sees Cardinale in the mold of the woman-as-survivor – a witness to the cruel deeds of men. But she is also maybe the most sympathetic character in the film, beset by the predatory motivations of even the ‘good’ cowboys around her.

This is a woman as idea, symbol, abstraction; not in her full humanity. But perhaps the entire film is made up of movie myth and archetype, with its shimmering vistas and riveting close-ups. Once upon a Time in the West is as much a reflection of cinema past as it is of the historical frontier.

Cardinale fiercely and defiantly embodies her role, rolling around in the dirt rather than swanning around in pristine gowns, and there’s something to be said for it. Perhaps it’s evidence that Leone was giving thought to the roles and sufferings of women in the grandiose, death-and-glory landscape of the American west. Perhaps Leone thought about it more many might give him credit for.
Posted by Tom B. at 6:12 AM