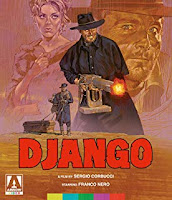 In February 2018, Arrow Film Distributors entered into an exclusive multiple territory license for the titles Texas Adios (1966) and Django (1966) which represented and warranted to Arrow that it held all rights to these films. Unfortunately, for reasons beyond our control and through no fault of our own, we have recently learnt that there is a dispute surrounding the rights between the previous distributor in the territory, Blue Underground and the Rights owner in Italy that made such representations to us. What followed, was interference from Blue Underground into our distribution of these titles. Many retail customers of ours in the US and Canada have been threatened by Blue Underground with cease and desist letters on the Django / Texas Adios products that we have produced so far, namely the 2-disc Limited Edition and the Limited Edition Steelbook, both scheduled for release on December 11th 2018 in both the US and the Canada.

We place the onus to resolve the issue of Blue Underground’s continued exploitation of the films outside of their license period, upon the underlying Italian rights owner. We are looking to them for resolution of the matter and in order to protect the retailers involved from any threatened action on the part of Blue Underground, we are for the moment, withdrawing the titles from distribution

We sincerely regret that this situation has arisen, and, although we are an innocent party in this, we apologise to you as our valued customers for the uncertainty surrounding the availability of this product. We are pushing the parties involved to resolve the matter in as quick a time frame as possible so kindly bear with us as we move this situation forward towards a resolution

All rights reserved
Arrow Films
Posted by Tom B. at 10:22 AM