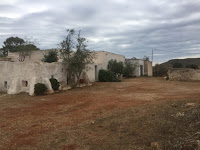 This Nijar countryside farm, is in an open area characterized by rows of agaves and red soil, about three kilometers east of Los Albaricoques. It is used very suggestively in the second prologue of “The Good, the Bad and the Ugly” (1966). This sequence opens with a shot that shows us a boy (Antonio Ruiz Escano) on the back of a donkey who is working on a "noria", an agricultural structure composed of a rotund with small wooden buckets to draw and pour the water for irrigation of the vegetable gardens and fields. While the boy is lazily turning around the "noria", he becomes aware of the arrival of a man on horseback. It is Sentenza, "the Bad" (Lee Van Cleef), who comes to Stevens' farm (Antonio Casas). The Cortijo de Dona Francisca area is also seen in  “Run, Man, Run” (1969); “Duck You Sucker” (1971) (the sequence of the failed firing squad shooting of Juan Miranda (Rod Steiger), saved from execution by John Mallory (James Coburn on his motorbike). It’s also present in the first sequence of “Silver Saddle (1978). Today this cortijo is still standing, but in the state of abandonment. The "noria" had fallen into disrepair but has recently been reconstructed, and the nearby circular "era" (aia), paved with stones arranged together, typical element of the traditional rural architecture of the Andalusia Campgna. 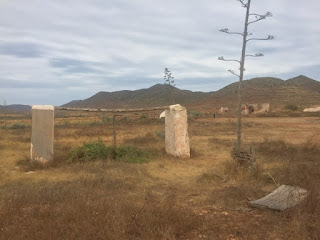