Who Are Those Composers ~ André Hossein 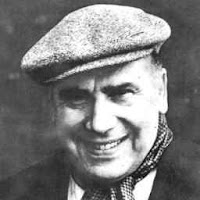 André Hossein was born Aminoullah Husseinov in Samarkand, Samarkand Oblast, Russian Empire in 1905. He was an Iranian composer of Neo-Romantic music and a tar soloist who resided in France. His mother was a Persian woman from Samarkand (present-day Uzbekistan) and his father was a merchant, originally from Azerbaijan. Aminollah Hossein lived for a few years in Persia (Iran) before he left the country for his academic studies.

His son, Robert Hossein, has written that his father studied in Moscow, Russia and later in Germany where he attended a music academy in Stuttgart and the Berlin Conservatory from 1934 to 1937. His fascination with pre-Islamic Persia led him to convert to Zoroastrianism. His newfound religion immensely influenced his musical work in symphonies such as "Persian Miniature", "I Love My Country", and "Symphony Persepolis". He married Anna Minevskaya, a Jewish comedy actress from Kiev, who had immigrated to Paris, France, with her parents after the October Revolution. He spent the rest of his life in France. He also studied privately under Paul Antoine Vidal in Conservatoire de Paris. An Iranian-Canadian music historian and student of the elder Hossein, Farya Pirbizari, has written that Mr. Hossein actually arrived in Moscow as a very young child, leaving for Berlin after the First World War to complete his secondary education and attending the Conservatoire de Paris in the 1920s under Artur Schnabel. In 1935 he wrote his first ballet, Towards the Light. He also composed numerous pieces for the piano, including some études. Aminollah's love for his native Iran is evident in many of his works, especially The Symphony of Persepolis (also known as The Rubble of the Forgotten Empire), which he finished in 1947. Aminollah Hossein also made a symphony on Khayyám poems in 1951. Other works by him include three piano concertos, Persian Miniature, Scheherezade (Shahrzad), and Arya Symphony. He also composed some film scores, including films directed by his son Robert.