A mysterious stranger with a harmonica joins forces with a notorious desperado to protect a beautiful widow from a ruthless assassin working for the railroad. 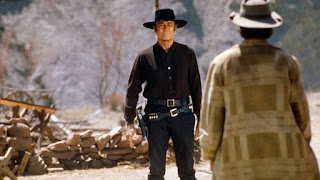 The Western genre has always dealt in mythologies. Some Westerns could be accurately labelled as revisionist propaganda — a nation trying to get to grips with shameful episodes from its own history by pretending things were different. There was a time when good Christian settlers were brutally victimised by the heathen redskins, the sheriff was always righteous, the good guys had square jaws and wore white hats, and the bad guys sported stubble and preferred black Stetsons. It was a history to be proud of, but that was just the movies. Perhaps that’s why it was down to European filmmakers to re-invent and reinvigorate the genre just as it was falling from grace in the mid-1960s.

Sergio Leone is certainly one of the most important film directors. I was just about to qualify that statement by adding “to come out of Italian cinema of the 1960s” but I realise that would only be a disservice to his standing! His mother, Edvige Maria Valcarenghi, was a popular actress of the silent age, best-known by her stage name Bice Valerian. His father, Vincenzo Leone (usually credited as Roberto Roberti), was an actor and writer who’d directed around 50 films and a baker’s dozen of shorts before 1930. So, young Sergio grew up against a cinematic backdrop of movie sets and matinees. He said it was film, above all else, that “nourished” him as a child, and most of his favourites were American Westerns.

Growing up in wartime Italy, there was a huge cultural disconnect with what he saw on the silver screen. To him it must have seemed an almost fantastical world of fabled heroes and stereotypical evil. Perhaps he would have recognised some parallels with the Wild West as the pre-war order crumbled around him, and the post-war rise of Mafia rule replaced the dictatorial fascism of Benito Mussolini. But as he grew wiser, he understood that these idealistic Westerns were more akin to fairy tales. They were ‘Once Upon a Time’ stories…

As a 10-year-old, Sergio Leone had appeared in one of his father’s films, Man on the Street / La Bocca Sulla Strada (1941). By the time he was 18, he’d dropped out of law school to work with Vittorio de Sica as an assistant director on The Bicycle Thieves (1948), in which he also made a brief appearance. He then penned a few screenplays for ‘sword and sandal’ epics, or ‘Pepla’, the most popular Italian genre in his native land during the 1950s. He then found work as a resident assistant director at Rome’s Cinecittà Studios, which he’d long-frequented with his father. There, he got to work on some major international productions, including Quo Vadis (1951), Helen of Troy (1954) and Ben-Hur (1959), and finally fell into the director’s chair on The Last Days of Pompeii (1959) when Mario Bonnard was taken ill.

His true directorial debut was The Colossus of Rhodes (1961), but it was with his second feature that he would innovate the visual language of cinema and re-invent the genre he had loved as a child. A Fistful of Dollars (1964) was one of a handful of films (along with Duccio Tessari’s Ringo films) that defined the emergent ‘Spaghetti Western’ genre, and the first of its kind to break the international market with distribution in the US, three years later.

Introducing Clint Eastwood’s now iconic super-cool, poncho-clad character of ‘The Man With No Name’, A Fistful of Dollars was unlike any Western America had seen, and ditched the Cowboys and Indians cliché in favour of a more timeless Shakespearian fable. Leone deliberately treated landscape in the familiar expansive style of a classic John Ford Western but looked to Akira Kurosawa’s samurai film, Yojimbo (1961), for its narrative pace and gestural approach. It was a box office hit, made Eastwood a superstar, and became the first of the three classic films we now know as ‘The Dollar Trilogy’, continuing over the next two consecutive years with A Few Dollars More (1965) and The Good, The Bad and the Ugly (1966). Leone made a huge stylistic impact on cinema, in general, and upon the Western genre in particular. In some respects, he became a victim of his own success and found he had no shortage of film projects coming his way from Hollywood, but they were all Westerns, a genre he wanted to step away from.

Leone changed his mind when Paramount waved a substantial budget in front of him, along with an offer that included the veteran actor Henry Fonda in the package. Well, that was enough to tempt the director back! Leone had dreamed of working with Fonda, one of his childhood idols from those classic westerns he’d been so captivated by. Consequently, late in 1966, he hired two fellow cinema aficionados to work on writing a Western that would hark back to those films and yet put a new twist on the outmoded all-American ideology they represented. Those two film buff buddies were Dario Argento and Bernardo Bertolucci, who both became great filmmakers in their own right. After being handed the title and some guidelines by Leone, they spent days watching classic Westerns, including John Ford’s The Iron Horse (1924), Fred Zinnemann’s High Noon (1952) and Nicholas Ray’s Johnny Guitar (1954). They were joined in the writing task by Sergio Donati, who had a hand in A Few Dollars More, and later contributed to the screenplay for Duck, You Sucker (1971).

They deliberately dissected these shared favourites, devising an elaborate post-modern collage of their iconography. Part of the fun in watching Once Upon a Time in the West is spotting all those interwoven references — some explicit, others more covert or even the reversal of the familiar tropes. It’s a masterpiece of what Leone termed “cinema-cinema”, by which he meant films that consciously draw upon film history to create a meta-layer of meaning, built-up from visual quotes and a clever reworking of established themes. The deliberate deployment of clichés. That’s something Quentin Tarantino later built his career on in the 1990s. Of course, this approach enabled Leone to be self-referential, quoting the startling stylistic innovations that typified his Dollar Trilogy: extreme close-ups and vast depth of field.

Henry Fonda was known as a good guy and had become the Western’s archetypal ‘white-hat’, so when he read their script, he turned down the part of Frank. He didn’t think he was the right choice to play such a cold-blooded villain, but after some convincing from actor friend Eli Wallach (who’d enjoyed his experience of working on The Good, The Bad and the Ugly) and after Leone himself flew over from Rome to talk him round, he changed his mind and decided it was time to do something that would challenge the preconceptions of casting directors.

When Fonda turned up to test for the part, he’d hidden his famous baby-blue eyes beneath dark brown contact lenses to give himself a more brooding look, and had grown a moustache to appear more rugged. He didn’t realise that Leone wanted to play with the conflict of that clean-cut boyish exterior and the cold sadistic character that would lurk beneath the surface. He knew this would contradict the audience’s expectations and be all the more shocking. It turned out to be a perfect piece of (mis)casting…