A review of the fundamental titles of the genius that popularized the spaghetti western. 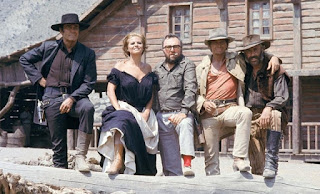 Three stony-faced men glare down under the burning red sun of an infernal Sad Hill. The sweat, revolvers and the strident - and not less famous - soundtrack of Ennio Morricone permeate a sequence that stretches indefinitely until culminating with a violent draw and the death of one of the protagonists. The quintessence of the spaghetti western shines under the illustrious baton of a genius: Sergio Leone.

The strenuous duel framed in the places of Burgos. Drops of sweat. The stubble of beards. The recurring musical motifs. The aura of epic cinema impregnated with a hyperbolic violence. Everything shines with style in the filmography of a director who, like Stanley Kubrick or Andrei Tarkovsky, never let itself be submitted by the power of the producers. He did what he wanted and how he wanted it. He only shot seven movies. Five of them are masterpieces.

In his spaghetti western, the typical messianic hero of Rio Bravo, The Man Who Shot Liberty Valance or Winchester 73 was replaced by an inert-faced rider who barely mumbles a few words during his nearly two hours of presence. An (anti) hero with no ethics or defined morals embodied by an upstart mercenary who sides with who pays the best. That Henry Fonda of Incident at Ox-Bow, who was the champion of democracy and rights struggling for justice and freedom in a ruthless world, was replaced by an imperfect Clint Eastwood of solemn factions who did not engage in tasks that he did not agree with.

The deconstruction of the motives of the western cinema promoted by Sergio Leone marked a time and forever changed the way of understanding the genre. His films characterized the spaghetti western basis. The influence on later directors, among them Sam Peckinpah and his violent crepuscular westerns in the Wild Bunch style, or the elegiac and misunderstood Heaven’s Gate of Michael Cimino, cannot be understood without the director of For a Few Dollars More.

A childhood marked by cinema and fascism

In Leone the influence of the Far West comes to him as a young man. His father, the filmmaker Vincenzo Leone (nicknamed Roberto Roberti), filmed the first western in Italian history, The Indian Vampire (1913), starring Bice Valerian, the filmmaker's future mother. Terrified that his son could follow the path of the industry of both his parents forced him to study law. But the attraction of Hollywood films and the vital disenchantment of fascism and the systematic propaganda of Mussolini's totalitarian regime upset his priorities.

Sergio Leone could not help being imbued with a purely transgressive spirit whose maximum tool of escape was the celluloid. The rupture with the established system and the lack of empathy towards any ideology and collectivity moved to their cinema through independent characters who are not positioned by either side, but by what they can profit. They are independent, skeptical and deeply atheists, for they believe in nothing but themselves and in the transforming power (of life in death) of their revolvers.

From assistant director to The Colossus of Rhodes

In 1948 Sergio Leone writes his first draft for the cinema, Viale Glorioso, in which it portrays its transit by the gangs of Italian mafiosi. This sketch would become decades later one of his great masterpieces: Once Upon a Time in America. Before sitting in the chair of the director, his prestige grew after collaborating on the shooting teams of The Bicycle Thief, Quo Vadis, and Helen of Troy. Working side by side with Raoul Walsh as an assistant director, who was delighted with his work, word got out that Leone was a great assistant. So much so that William Wyler gave him the role of the second unit director when shooting of Ben-Hur. Sergio Leone designed and recorded, alongside Andrew Marton and actor Yakima Canutt, the famous scene of the chariots at Cinnecittà studios.

It was not until that same year, 1959, when Leone sat in the director's chair for the first time. Mario Bonnard directed the last days of Pompeii, but fell ill, so the producer called Leone, Ducio Tessari and Sergio Corbucci (who in 1966 would become famous for directing Django) to be replaced and finished the film. In compensation for the good box office results, the producers offered to Sergio Leone to direct El coloso de Rodas (The Colossus of Rhodes), a violent Peplum (in the 1950s and 1960s this genre was very popular in Italy) contextualized in Ancient Greece.

First sketches of a unique style

The great protagonists of El Coloso de Rodas, the first solo raid of an already prestigious Sergio Leone, was an extravagant artistic design invaded by fire, smoke and blood bubbling and an epic eccentricism magnified by gigantic sets (including the Colossus) reminiscent of the massive constructions of Giovanni Pastrone and David Wark Griffith in Cabiria and The Birth of a Nation.

The filmmaker, disgusted by the narrative trivialization in which he had degenerated the peplum, maneuvered skillfully to introduce elements that were later characteristic of his cinema and satirized with disbelief a popular genre devoid of any originality. The Colossus of Rhodes served as an exordium of what would be his later cinema.

As Jean-Baptiste Thoret points out, Leone shows creative pieces that would later be found in his celebrated spaghetti westerns: "the two opposing sides and, among them, the alien, individualist hero whose successive alliances will dictate the evolution of the story; [...] the rejection of that protagonist by taking sides; and the opportunism, so rooted in the essence of Leone's heroes, and which already manifests a chronic skepticism as far as collective and political ideologies are concerned. "

In the beginning, his first forays into the western were rejected by the specialized film critics (with the exception of the French), who saw how A Fistful of Dollars, first part of the Dollar Trilogy, and therefore the first product entirely directed by Leone, the conventional schemes of Western American cinema and translated them into a dirty and picturesque symphony of explicit violence, torture and music reminiscent of pop. Everything, again, imbued with the transgressive (and wearisome) spirit of the time-bombs.

For the project he wanted to hire, first, his idol: Henry Fonda. But the actor rejected the project. Nor could he count on James Coburn, whose price was too expensive. Not with Charles Bronson, who laughed at the script and said he never read anything so stupid. Three actors that in the end would end up working with Leone in Once Upon a Time in the West and Duck You Sucker! They acted in the same way as their characters: for convenience, and only approached the heat of the dollar when Sergio Leone was already a star.
Finally Leone decided to hire the actor and co-star of the TV series Rawhide (broadcast in eight seasons between 1959 and 1965), which was also aa western. Eric Fleming, its protagonist, was chosen by Leone. Fleming, to the despair of the filmmaker, rejected the project, but recommended to his running mate, a young Clint Eastwood recently in his thirties, who agreed to join the team.