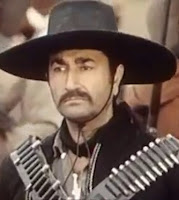 Spanish actor Rafael Albaicin is known to most of us an excellent supporting actor in many Eur-westerns. Rafael usually was seen playing Indians, banditos or gang members. Few us know that before he became an accomplished actor he was a famous bullfighter. A man of culture, Albaicin took violin and piano touring Holland, France and Belgium in his youth. He then became a composer and costume designer for the bullring. He then took up the sport and became a bullfighter from 1942 to 1948. He decided to stop dodging the deadly horns of enraged bulls and turned to acting where he dodged fake bullets and became an actor in the early 1950s until his final appearance in “Comin’ At Ya!” in 1981. 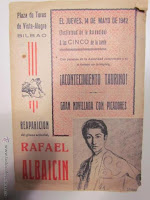