First published in 1970 only 6, 2 pages issues were printed.

The development of a promising collaboration of comic book writers and artists, Lob, Derib and Jijé, an agency contacts Jijé on behalf of Johnny Halliday. The actor is the protagonist of “The specialists”, a western film by Sergio Corbucci where he plays the role of Hud, and would like a comic book adaptation for a new weekly, Johnny, whose title obviously does not need explanations.

For the texts of the story Jijé (Joseph Gillain) turns to his son Philippe Gillain, who here strangely uses the pseudonym of Philipp instead of the usual Philip, his collaborator also for some episodes of the comic book Jean Valhardi and Jerry Spring.

In April 1970, at the rate of two pages at a time, Hud le spécialiste made its debut with the first issue of the weekly magazine featuring the face of the "cowboy" Johnny Halliday.
But things do not go as planned, sales are scarce and Jijé is not paid. So they end the collaboration after the sixth issue, which contains only a single page, leaving the story pending. The life of the weekly is not much longer, since in the next issue it ends without many regrets on the part of its few readers.

The eleven pages that were completed for Hud the spécialiste are certainly not among the best things of Jijé. Bound by the image of the protagonist and by the correspondence with the film, it seems to have worked partly for economic needs (legitimate even if vain) and partly to detach a bit from the aerial acrobatics of Tanguy and Laverdure, unloved by him even if magnificently realized. The setting of the table and the cartoons, far from the classical one on three or four stripes, is unusual and not very enjoyable.

Always fascinated by the theme, he becomes involved in the project of a series of books drawn from the films of Sergio Leone of which he also draws some pages. The operation failed due to the excessive requests of the director to Dargaud, in 1974 Jijé returns to his favorite western settings with the resumption of Jerry Spring in Le Journal de Spirou, of which he realizes three adventures until the end of 1977. 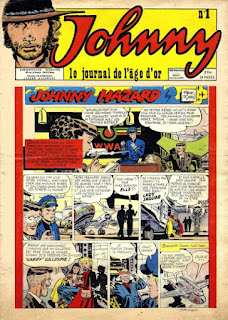