Sam Boyle was a settler, who along with his family, fell prey to a group of Indians. His wife died while he was scalped and left for dead by his attackers. After this incidence Sam took up residence in the territory and became a scout for the Army. At the same time he started to wear a diabolical mask and fought against the Indians who attacked him and his family.

The Kinowa character appeared in only five issues beginning in 1950. 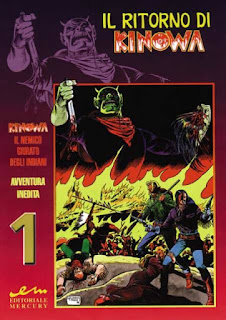 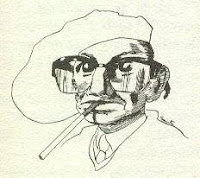 Born into an Italian family in Paris, France on December 12 1905. He returned with his parents to Chiavari in 1913 and soon abandoned his studies to help out the family. From 1924 he worked alternating writing short stories, poems and novels for various magazines.

In 1940 he wrote the first scripts for Dick Lightning, created by Vincenzo Baggioli and Carlo Cossio, and in 1946 he gave birth, along with the artist Edgardo Dell'Acqua, to Gim Toro, his first successful character. Many others will follow: from Geky Dor and Tony Hawk and Condor Kinowa Gek, from Mask White Lightning Phantom, from cyclones to Little Ranger and Calam, "the West Panther".

Creator of the comic book page of the newspaper The Day, from 1957 to 1966 he also dealt with the weekly supplement The Day of the Boys.

In the seventies he wrote a series of interesting articles on the authors and publishers of Italian Sgt.Kirk publisher Genovese Florenzo Ivaldi and the magazine of the National Association Comics cartoon friends.

A group of Italian authors composed of John Sinchetto, Dario Guzzon and Peter Sartoris. The three separately debuedt in the world of comics: Sinchetto in 1947 Furio Masked draws on texts by Andrea Lavezzolo; Guzzon the following year draws half-tone sentimental stories, often about Sartoris texts, for Piccina. The three find themselves in 1950 in Milan, where Guzzon and Sartoris had moved after closing Piccina, to collaborate with Edizioni Alpe and decide to pool their forces giving all'EsseGesse life.

The group debuted with Kinowa, written by Lavezzolo, and imposes itself in 1951 with Captain Miki, successfully repeated three years later with Il grande Blek, all figures published by Dardo and, except for the first which lasted only two years, the rest continued for a long time.

In 1965 they try a publishing venture, with the initials SISAG (from Sinchetto, Sartoris, Guzzon), and publish Alan Mystery, but give up quickly, after only 23 issues, as well as working from then on only in artistic production.


In 1966 they created for the publisher Bonelli their third successful character, Commander Mark, who was also joined by other authors, continued until 1989.
Posted by Tom B. at 6:13 AM