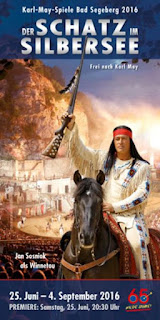 Seven other actors involved: many crowd favorites on the team

The team is complete. While German coach Joachim Loew has to find his ideal team for the European Championship 2016 yet, the Elf of the Karl May Festival is already complete. Eleven actors are to experience the new adventure "The Treasure of Silver Lake" in the summer in the open-air theater of limestone. The audience can look forward to Bad Segeberg crowd favorites known it is presented by the award-winning actor of the comedy show "Switch Reloaded" Peter Nottmeier as "Lord Castle Pool".

After the naming of the main roles with Jan Sosniok ("Winnetou"), Till Demtrøder ("Old Shatterhand"), Susan Sideropoulos ("Ellen Patterson") and Oliver Stritzel ("Cornel Brinkley")  they were still looking for nine other roles for seven actors, For the first time in the open-air theater on Kalkberg Peter Nottmeier appears, specializing in precise parodies. It is the role of the "Lord Castle Pool" - with an accompanying wink, whimsical Boomstick and non-hazardous bagpipes.

Also on the team are Nicolas König ("Ovuts-Avaht, the Great Wolf"), Joshy Peters ("Missouri Blenter") and Harald P. Wieczorek ("Engineer Patterson", "Major Norton" and "Big Dipper") three Actors who for decades have been loyal actors in the Karl May Festival and have experienced many adventures in the dust of the Wild West Arena. Dirc Simpson, who took over in Bad Segeberg in 2004 the different roles, changes from sympathetic Westernkauz "Sam Hawken" to the ice-cold gangster "Knox".

In addition, two actors return after several years break back onto the team of Karl May Games: Frank Roder plays the Saxon Westmann "Hobble-Frank" and Philip Schwarz the young Indian "Little Bear", the last of the Tonkawa tribe.

For "The Treasure of Silver Lake" we opted for a mix of new faces and some of the biggest crowd favorites of recent years. The audience can look forward to the greatest of all Karl May classics - with a lot of fresh ideas and surprises.

For more information and to order tickets see the link: https://www.karl-may-spiele.de/fileadmin/user_upload/Aktuell/Vorfolder-Karl-May-Spiel-2016-web.pdf
Posted by Tom B. at 10:31 AM