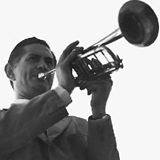 "For a Fistful of Dollars", the film of Sergio Leone. His ringing trumpet the iconic ‘La resa dei conti’: the notes that go hot and painful, of a dramatic intensity, reached the heart and ears of everyone. So to it became one of the most acclaimed Italian songs in the world. The score is notoriously composed by Ennio Morricone, but not many know that playing it was Michele Lacerenza the extraordinarily talented musician, who played in large orchestras such as Gorni Kramer and Armando Trovaioli, in the Radio Orchestra of the RAI, and was part of Josephine Baker’s memorable Italian tour. After his exploits on "For a Fistful of Dollars", 1964, he became the trumpet-fetish of many spaghetti westerns. A recent documentary, "A Perdifiato ", directed by Giuseppe Sansonna, it traces the artistic career and biographical Lacerenza. Blending archive pictures, with the voices of artists and then the sound of his trumpet, to mark the segments of a balanced narrative of the history of cinema and special memories. Among the many valuable contributions is the outstanding, visionary, of Vinicio Capossela, Avellino Andretta and countryman Leone: "That trumpet rends the long silences of Leone, like a cry that rises from the rocks and the desert. The trumpet of the Lord calls for the judgment of souls, is the sound of Michele's trumpet announcing the showdown." In the movie, The Man With No Name performs to the sound of Lacerenza’s trumpet, the documentary was produced by the children of the musician under the independent label Cortolab. Morricone remembers him as "a sublime trumpet player. I wrote that solo thinking about his playing. Sergio Leone at first wanted Nini Rosso and Michele knew that. He played with his soul, with tears in his eyes. And Sergio was seduced by that yearning sound, painful. "He echoes of the west of the sweaty and ferocious Leone and various other directors, such as Albert Cardiff. The sharp looks, mocking laughter, sound bites. white houses standing out against the background. A western family, very close to the South of Italy. Leone was the raised in the Torella dei Lombardi, Campania hinterland. The music of his films filters the southern sounds: whistles, the whip snaps all evoke the Rusticana duels of Verga, more than the attacks of Apaches. And then there’s that vibrating horn, fiery. Michele Lacerenze was not a mere performer: his interpretation of the final solo of "For a Fistful of Dollars", by Morricone's own admission, is a pure re-creation of the score. A way of playing that has deep roots. Lacerenza, formed his own trio, inheriting the popular passion. The documentary goes back to the thirties when Giacomo, father of Michele, "embroidered in gold" with his trumpet. Requested by King Vittorio Emanuele III, to be honored at 'Expo in Milan in front of Buffalo Bill, was the master of the local band, at that time and a part of its national prestige. Giacomo dragged his crew of hungry musicians playing for glory and food throughout the South of Italy. They race at breakneck speed on dirt roads, aboard stagecoaches: all reconstructed scenes with dream cut by Sansonna. The masterpiece of Giacomo's "sadness", a harrowing funeral march, still heard on the soundtrack of Tarantino sacred representations, "Perduni". That was the background of Michele Lacerenza, his inner soul. Then, in the forties, his schooling in Rome, graduating from the Conservatory Santa Cecilia, and performing at the major Italian theaters. He became "first trumpet", adored by the kings of the cinema such as Vanda Osiris, Aldo Fabrizi, Alberto Sordi, Carlo Dapporto, Alberto Rabagliati. And Carlo Giuffre, who died in 1989 greet’s his friend, with a sweet "Hello Michele. ... See you soon!".
Posted by Tom B. at 5:48 AM