Bud Spencer looks back at his so eventful life like few others. Competitive swimmer, actor, lawyer, entrepreneur and music producer: The experiences that he collected as the "king" of the Spaghetti Western, wealthy for several existences. Despite his 86 years the heavyweight hero of countless action comedies hungers still for new adventures. 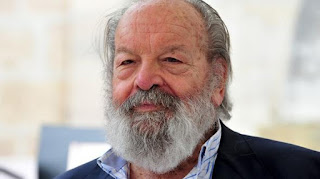 Few know that he was born as Carlo Pedersoli scion of an industrialist family and that he participated at two finals of the European Swimming Championships in Vienna. Seven times in a row Pedersoli won the Italian championship. His swimming career which began as a water polo player, reached the peak, when he was allowed to participate in the 1952 Olympic Games in Helsinki. In 1956 he participated in the Summer Olympics in Melbourne and then played rugby.

"I was never particularly ambitious. Regular training was not my style. If I had worked harder, I would have come a much better swimmer and gone on much further ", said the native Neapolitan in an interview with APA in his apartment in Rome. He never aspired to the maximum, everything had come to him effortlessly. But he had more than just the sport on his mind.

After completing his doctorate and various odd jobs that took him to South America, where he befriended film director Giuseppe Colizzi in 1967 and who gave him his first major film role. Colizzi sought then a giant for his film and at 1.94 meters wide Pedersoli struck him as the perfect fit. From the bearded athlete he became the portly giant. "My acting career started as my sporting career came to a finish: Total unplanned" says Pedersoli recalls.

Bud Spencer’s motto today as it was yesterday: "Let me pass, I just live my life!". This playful philosophy of life that stands in stark contrast to his beefy body structure has opened the actor to the hearts of people in all parts of the world. The contacts he has made are scattered on all continents with fans he now cares now about on his Facebook page "Bud Spencer Official". Because of the impressive Italians recently forfeited all the fascination of social networks. Furthermore, he reports in his new book "What I Wanted to Tell You", which is published by the German publisher "Schwarzkopf & Schwarzkopf". The work contains wisdom with autobiographical references and many worry about the past, present and future of this world.

"I am a Martian who always throws himself into new adventures"

He uses his grandson Alessandro, who maintains the Bud Spencer site, for daily contacts with his fans. It has collected more than a million "likes". There are numbers of big stars. "A madness! Who even cares about the fate of an 86-year-old, I often wonder. But my brain, like a 28-year-old still thinks and tells me that this is just another record in my life. I wonder about everything, "smiles the father of three and five times the grandfather.

For 56 years Bud Spencer is married to Maria Amato. The daughter of the famous Roman film producer Giuseppe Amato, who likes showing pictures and newspaper articles from her private archive on the career of her husband to visitors, she has always supported Spencer not only in his cinematic career, but also in his human career. Even as an unexpected turn took the actor and his own airline, the "Mistral Air", which he founded and which cost a lot of money. "Flying is like all passions: expensive," sighs Bud Spencer. Also, a textile factory for children's fashions has been built by the actor. "Maria has actually married a Martian. Because my nature drives me to swim against the tide and to plunge into new adventures. "

... And then came Terence Hill

When Spencer's partner in "God forgives, I Don’t" was committed by director Colizzi to a slim, good-looking guy who also was still starting at the beginning of his career - his name: Mario Girotti, son of a Venetian and a German mother, better known as the American-inspired stage name Terence Hill. A dream team of the international movie industry was born. Films such as "Trinity Is Still My Name", "All the Way, Boys" and "Two missionaries" became absolute blockbusters. "But my favorite movie is the German-Italian production 'Banana Joe' from 1981," says the ex-brawler.

"We cannot do without each other"

Bud Spencer is indeed a legend of action cinema, but he has never surrendered his star allure. Today as it was yesterday he treasures his friendships. Contact with Terence Hill has never been lost and still remains a fixture in Spencers life.

"We cannot do without each other. Although professionally we go elsewhere, we keep continuous contact. If Mario is in Rome, he makes me visit always. We both had the incredible good fortune during World War II to survive the bombing, I in Rome and he in Dresden. This experience has made us both deeply influenced and welded together. Many of our fans did not know that we were an Italian duo. Because our artists' names you thought we were Americans”, says the actor.

Although his health is not as good today as it has been, Bud Spencer cherishes new projects. So he wants to write more parts of his autobiography. "I have material for countless volumes," he says. In June, he will participate in an event in Klagenfurt, but he does not want to reveal any further details. "I had countless times in Vienna and love Austria and its gastrono. Wiener Schnitzel tastes excellent to me and of course the desserts. But my favorite dish is roast potatoes, quite unusual for a Neapolitan who was supposed to live on pizza”, he says.

Despite his busy life Spencer thinks sometimes about his death. "I am in no hurry to explore the afterlife. But I am a curious person and want to find out what is going on on the other side. If there is nothing, I would be really angry!" laughs Spencer.