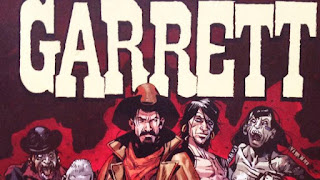 ROME — Wildside, the Italian production company in which FremantleMedia recently took a majority stake, is venturing into unexplored genre TV territory with Spaghetti Western Zombie skein “Garrett,” based on the eponymous Italian comic book which has a cult following in Europe.

The comic book takes its cue from Sam Peckinpah’s classic western movie “Pat Garrett and Billy the Kid,” with the twist that the Indians are zombies. Author Roberto Recchioni has described it as basically a mash-up of the “Pat Garrett” pic with George A. Romero’s Zombie movies. Is also turns the cowboys into glam heavy metal figures while keeping the historical context accurate.

The plan is to adapt the property into an English-language TV series likely to be shot in Spain with American actors, inspired both aesthetically and from a production standpoint by the Spaghetti Westerns that Sergio Leone shot in Spain which launched Clint Eastwood’s career. Lorenzo Mieli, head of Fremantle Italy, said he is in talks with U.S. broadcasters to come on board.

Mieli underscored he wants “Garrett” to have the same raw and realistic tone that Spaghetti Western epics are known for. “The zombies will look as realistic as possible,” he underlined.

Other previously unannounced skeins now on Wildside’s international slate are “The Miracle,” being penned by best-selling Italian novelist Niccolò Ammaniti, centered around a plastic statue of the Virgin Mary which weeps tears of blood, and non-conventional crimer “Mafia Princess,” to be shot partly in English and partly in Italian.

Previously announced shows in the Wildside pipeline include “The Neapolitan Novels,” an ambitious 32-episode adaptation of hot Italo author Elena Ferrante’s tomes. It is expected to start shooting in Naples in mid-2017.
Posted by Tom B. at 6:15 AM