Who Are Those Guys? - Beppo Brem 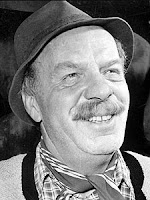 Josef Beppo Brem was born in Munich, Bavaria, Germany on March 11, 1906. The son of a brewer he grew up in Munich's Schwabing.  He had a penchant for theater, and discovered it as a stage carpenter at the Munich Kammerspiele.  His first roles began in 1925 while taking acting classes and he appeared in his first engagement at the provincial theater of Bad Reichenhall in 1927.  As a guest in Regensburg, Ulm , Berlin and Munich, he appeared  in pieces like Don Carlos and Carl Zuckmayer’s Schinderhannes.

In 1932 he married the former soubrette Marga Wening, with whom he was married until his death.  The marriage produced a daughter.

In the 1950s, Brem’s film work continued.  He played with stars like Heinz Rühmann , Hans Moser , Johannes Heesters , Hans Albers , Heinz Erhardt , Peter Alexander and Theo Lingen and was seen in home movies, comedies of mistaken identity and music and military clothes.  Often he appeared the films of his friend Joe Stöckel.  Both the genre and the type that he embodied, hardly changed.  He rarely played a serious character, exceptions were “Fanfaren der Liebe” (1951) and “Des Teufels General” (1955) by Helmut Käutner with Curd Jürgens. Together with Liesl Karlstadt he played in the first television commercial in 1956 , which the ARD broadcast.

In the 1960s he filmed several episodes of Ludwig Thomas’ Lausbubengeschichten that showed him as a comedian.  On television, from 1965 to 1970 and from 1978 to 1982 he had great success appearing in 112 episodes of television series ‘Der verkaufte Großvater’, alongside Maxl Graf and Fritz Straßner .  Here he played the wily detective inspector, who solved his cases unconventionally.  As the importance of home and music video subsided, the actor was involved in a number of German sex films in the 1970s, which did not diminish his reputation. Beppo Brem was also seen repeatedly in Munich theaters, among others in the little comedy “Kleinen Komödie am Max II”, at the Bavarian State Theatre and the Theater in Briennerstraße. He also played more serious roles in popular plays. At times, he was also a member of the ensemble of Chiemgauer Volkstheater .

A highlight in the late works of the actor was the embodiment of the caretaker in the comedy “Hexenschuß” 1987 with Helmut Fischer.  He made his last appearance in the play “Der verkaufte Großvater”, in the television series Heidi und Erni as a disused tram driver in the melancholy drama “Auf dem Abstellgleis” (1989) with Erni Singerl and Toni Berger, a gift from the Bavarian Radio to one of his most important mimes. Shortly after the end of filming Beppo Brem died in a Munich hospital of lung cancer and was buried in the north cemetery in Munich.