Cortijo el Sotillo (aka Farrow Farm) is located on the outskirts of San Jose, Spain is an 18th century farm house. The site consists of two building which face each other. The main building has been used in several Euro-westerns and the grounds themselves have also been used.

The two main buildings were seen in the opening shots of Fistful of Dollars when The Man With No Name stops by the well for a drink of water and is introduced to Marisol, her husband and son Jesus. Some of Ramon’s henchmen are also present. Later we see the interior of the main house when No Name rescues Marisol rejoins her with her family and sends them on their way.

Other films using the interior was Johnny Yuma both inside for one scene and later as the location where Johnny finds the murdered farm family. 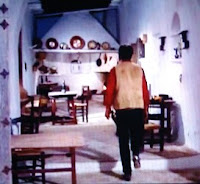 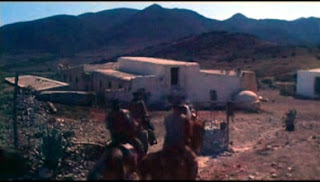 It also shows up again in Day of Anger when Lee Van Cleef shows up and encounter’s some of Wild Jack’s henchmen. Both the exterior and interior are used and seen in the film.

Behind the buildings in the direction The Man With No Name was entering the opening shot at the well is a threshing ring and this ring was used in Day of Anger when Frank Talby is dragged around it and then saved when Scott Mary throws him a pistol. It can also be seen in "Johnny Yuma" and "Gunmen of the Rio Grande."

Today the buildings are still in use as a hotel, restaurant and bar.