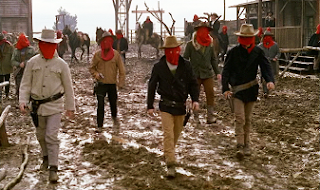 In 1966’s “Django” The Major's henchmen wear red hoods over their faces to hide the fact that because so many extras were being employed on other pictures in the area at the time, Corbucci was left with only the "ugliest" ones, who were deemed not menacing enough, so they were all given hoods to cover their faces. This red hood and scarfs was carried over into such films as “Tombstone” where all the Cowboys wore red sashes and Quentin Tarantino’s “Django Unchained where the henchmen of Big Daddy (Don Johnson) all where hoods to conceal their identities. 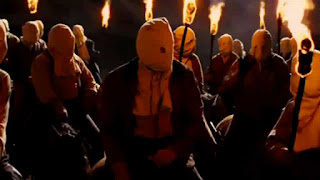