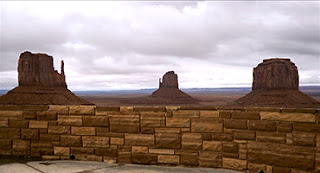 The American West. We have arrived in a world where human life would seem to be impossible: an arid, mythical landscape characterized by absence. Absence of water, trees and life. In the beginning there was nothing. But then traces start appearing.

Desert Haze tells the many-layered story of human presence in the American Desert. The traces of the past are like geological strata in the desert. The film becomes a mosaic of various stories, merging in a peculiar chronicle of America at the crossroads of present and past, myth and reality.

From astronauts preparing for future missions to Mars to Japanese country singers, archeologists hunting for the remnants of military test airplanes, the mysterious death of John Wayne...