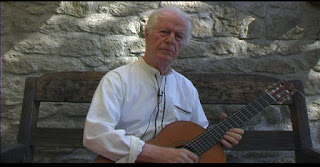 With the release of Quentin Tarantino’s THE HATEFUL EIGHT, there’s been much buzz in the press about QT nabbing the legendary Italian composer Ennio Morricone to write the original score; this after the director had long been licensing individual Morricone tracks for his last few pictures.

Morricone deserves every accolade awarded him, of course. The impact of his work in Italian westerns, horror, action, arthouse and mainstream American cinema (check out his alarming work in Brian De Palma’s 1987 classic THE UNTOUCHABLES) cannot be properly measured.

But a name that rarely gets mentioned in respect to vintage Italian film soundtracks with as much reverence is Alessandro Alessandroni.

The latter film’s theme is a fuzz-guitar soaked, ethereal masterpiece of groove and doom.

SHOCK spoke to the brilliant Alessandroni to discuss THE DEVIL’S NIGHTMARE and touch on some of his many adventures in Golden and Silver age Italian genre cinema.

SHOCK: How did music become your life?

ALESSANDRONI: In the village of Soriano, where I grew up, there were small shops called Barber & Taylor shops and they had a myriad of instruments hanging on the walls. In between clients—or when there were no clients at all—anyone could play the mandolin or guitar or cello or clarinet….and that is how I started this journey. I am self-taught with no professional training.

SHOCK: Many fans know you from your work with Ennio Morricone on all those incredible Sergio Leone westerns, especially with respect to your trademark whistle. When did you discover your talent for whistling?

ALESSANDRONI: Well, it was quite by accident that this became my trademark. During a recording session of music for an early film I was involved with, (composer) Nino Rota asked if anyone in the orchestra could whistle—I was playing guitar then. No one came forward so I said that I could try but couldn’t promise anything. But it worked and that is how the quality of my whistle was discovered. By the time Ennio and I worked together, I was an expert!

SHOCK: Can you tell me about your initial work with Morricone? How free were you to experiment?

ALESSANDRONI: My work with Ennio was always engaging and always creative. Often I would suggest alternative styles in the execution of his written music, bringing in guitar – the whistling – some more rock influenced sounds.

SHOCK: Do you ever feel that you haven’t received enough credit for your work on those incredible westerns?

SHOCK: Can you describe those prolific days working in the golden era of Italian cinema in the 60’s and 70’s? It must have been a very exciting time…

ALESSANDRONI: In those years we had so many wonderful directors in this country – Fellini, Pasolini, Risi, Germi, Leoni – and so many wonderful films were being made. After the success of A FISTFUL OF DOLLARS, we Italian musicians were kept very busy because so many westerns were being made as well as horror films and other pictures that could be exported easily to America and around the world. Also, my choir The Cantoni Moderni di Alessandroni was very much in demand for films and recordings. Yes as you say, it was a very exciting and incredibly busy time and I’ll admit that I miss it.

SHOCK: One of my favorite scores of yours was for Jean Brismee’s 1971 horror film THE DEVIL’S NIGHTMARE. What are your memories of that picture?

ALESSANDRONI: I remember that film vaguely. It wasn’t too bad as I recall. But after some 40 years – and a lot of music in between – I don’t remember very much about my score!

SHOCK: Who did those haunting female vocals for the film’s opening theme?

ALESSANDRONI: Ah, that would have been my late wife, Giulia De Mutiis.

SHOCK: Your work in the same year’s LADY FRANKENSTEIN is also brilliant, fully exploiting that distinctive fuzz guitar. What did you think of that film and of its American director, Mel Welles?

ALESSANDRONI: That film is actually pretty good! One of my better horror scores, I think. I don’t recall working with Mel Welles, however. As was often the case, he may have left it up to me to create the sound as I chose appropriate without too much interference on his part.

ALESSANDRONI: Now that one was no great masterpiece, I can tell you that. In fact, I must admit that it was a very mediocre picture and I refer to both the film and the music itself. But I worked very well with Mattei and I found him to be a very nice man.

SHOCK: You worked on two adult films in 1980 with the great Joe D’Amato (Aristide Massachessi)…

ALESSANDRONI: Yes I did and you know, D’Amato was really amusing, a very colorful character. As far as my music on those pornographic pictures, the big difference was that, well I was obliged to think erotically, not horrifically. I think my work on those movies is pretty good and a lot of fun.

ALESSANDRONI: I would willingly compose more film scores but in Italy these days everything is motivated by politics for political ends. That is not for me. I am a free man and I would want my music free of obligations or constraints. Anyhow, I am glad that publishers are reprinting a lot of my music and that people are now buying the CD collections.

SHOCK: Your scores for horror films were so eccentric and interesting. Do you watch horror? Have you heard any music in horror that you really liked?

ALESSANDRONI: No, I have never watched or listened to horror except to compose for those horror movies I wrote the scores for. I simply followed my instincts. The bottom line is that I LOVE to create new sounds all the time and horror movies gave me great freedom to do that.