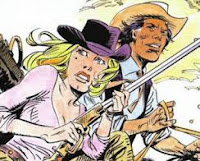 Bella & Bronco is the title of a comic book series created by Gino D'Antonio in 1984 for the publisher Daim Press (today's Sergio Bonelli Editore ).

Bella Madigan, owner of a saloon in the war zone between North and South, does not feel the lack of a man, at least with regard to the local management; its nature is such that it compensates for any deficiency male and is able to be respected without too many problems. The Captain problems for those who do not know her and underestimates a first approach, making then made the mistake when it is too late.

You cannot define more apparently a lady, given his character and his language: but then a woman in the West must know how to defend herself and she does it very well. surely loves the good life and just may, with Bronco, gets it in every way: nice restaurants, nice hotels, luxury clothes, perfumes.

Bronco, wild horse, is a Cherokee Indian, brought up to Father Pierre Indian Mission, and then civilized. Dresses elegantly, good looking, well spoken, is highly educated, to the limit of the paranoid: his memory is a mine of information ranging from pure rote learning to information which is capable of processing to realize ideas on how to take himself and those along him out of trouble.

It was the first experiment by Bonelli to propose a female figure to star in its own series Beautiful, among other woman emancipated and self-assured, in the company of an Indian named Bronco that presents itself, contrary to stereotypes typical of those belonging to his ethnicity, as a very erudite.

The couple's adventures are set in the period marked by the Civil War , but review all the typical themes of the western genre, with a corollary of minor characters who occasionally interact with the duo. Among the artists who drew the series were Gino D'Antonio, Renato Polese, Alessandro Chiarolla, Gaspare and Gaetano Cassaro and John Freghieri.

Since December 4, 2006 the series was reprinted in the numbers 39-43 of the History of the West Editions. If under the heading of West History presents Bella & Bronco.  In the first issue are present four episodes, while in the remaining there are three episodes and it respected the chronological order of the original publication. 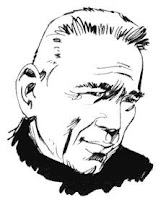 Luigi (Gino) D' Antonio, writer and artist, was born in Milan on March 16, 1927. He began his career almost by chance. In the mid-forties, he was the neighbor of Mario Oriani (a writer on Corriere dei Ragazzi) who helped him to start his career as author and artist. D'Antonio was always passionate about drawing, and began his career on Jess Dakota, (Joe Dakota in France) at Della Casa publishers, in a style obviously inspired by Milton Caniff's Steve Canyon.

In 1950, he became acquainted with Mario Leone and drew the series Angeli della strada (based on Leone's story). From 1951 to 1957, he collaborated on the magazine Il Vittorioso. In 1952 he began his most famous series, Pecos Bill, a western series created by Guido Martina and Raffaele Paparella. In 1954, he drew many illustrations for the weekly magazine Domenica del Corriere and some episodes of the second series of El Kid, another western, based on stories by Gianluigi Bonelli (published by Audace (the first incarnation of Sergio Bonelli Editore)). In 1955-56, still for Audacity and with Bonelli, he drew some episodes of I Tre Bill and also contributed to Western, a review published by Dardo.

In 1955 he became acquainted with Rinaldo D'Ami who headed his own studio with a team of artists who worked for the English market. Within the D'Ami studio, D'Antonio illustrated dozens of stories for Junior Mirror, Junior Express, Top Spot, Thriller Picture Library (Battler Britton Target Berlin - 1958), Cowboy Picture Library (Gun Rule - 1962), Fleetway Super Library  and War Picture Library, and drew covers for Eagle and Boys World. He also drew adaptations for traditional literature (Twenty Thousand Leagues under the Sea, Moby Dick, Quo Vadis, Tale of Two Cities, The Odysee) for Tell me Why and World of Wonder. These latter being color illustrations which he had not attempted before.

In 1966 he created Il storia del West (History of the West) for Italian publisher Bonelli (which was still called Araldo at this time). To find out more about this series

In 1996, at the International Show of Comics at Lucca, he received the title of "Master of the Comics" for his life time's achievement in comics. In 1999, he worked on the new Bonelli series: Julia as a writer with illustrations by Giancarlo Berardi.
Posted by Tom B. at 5:49 AM