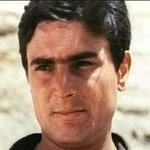 Italian supporting actor Ugo Adinolfi died in his sleep in Rome on April 26th. He was 73. His son Mario reported his father’s passing on Facebook. Ugo was born in Milan, Lombardy, Italy on April 1, 1943. He moved to Rome where he graduated from the Experimental Centre of Cinematography and became an actor in over 60 films of which eighteen were westerns. In the early 1970s he left the business to devote time to his family. Most of the films he appeared in he had small parts and he was cast mainly for tax purposes. Among his films were “Killer Kid”, “The Moment to Kill”, “The Wild and the Dirty” (all 1967), “Gatling Gun”, “Kill Them All and Come Back Alive”, “The Mercenary”, “Sartana” (all 1968), “A Man Called Apocalypse Joe” (1970) and “Drummer of Vengeance” (1971). His son is journalist and politician Mario Adinolfi.
Posted by Tom B. at 5:32 PM