Voices of the Spaghetti Western – “The Sheriff of Fractured Jaw” 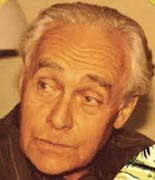 Klaus Miedel was born in Berlin, Germany on July 4, 1915. While Miedel had a stage background, he worked primarily with his voice, first on radio beginning in 1947 and then in dubbing. He was the standard German voice of Dean Martin and Yul Brynner (including “The King and I”) and also dubbed Telly Savalas several times, Peter Sellers in “The Wrong Box”, Theodore Bikel in “My Fair Lady”, John Gielgud in “Chariots of Fire”, and Herbert Lom in “A Shot in the Dark”. Miedel often utilized a French accent, for French actors Louis de Funès, Michel Serrault, Jacques Marin, and Pierre Tornade, and for parts like John Cleese as the French taunter in “Monty Python and the Holy Grail”, James Coco in “Murder by Death”, and Romney Brent as the French ambassador in “The Virgin Queen”.

In animation, Miedel dubbed Flintheart Glomgold on “DuckTales”, Sir Hiss in “Robin Hood”, the magic mirror in the second dub of “Snow White and the Seven Dwarfs”, Monsieur D'Arque in “Beauty and the Beast”, Max in “Yellow Submarine”, and Warren T. Rat in “An American Tail”. For TV, he dubbed William Schallert on ‘Get Smart’, Roger C. Carmel as Harry Mudd on ‘Star Trek’’, the tape voice on Mission: Impossible’, and various guests on ‘Bonanza’.