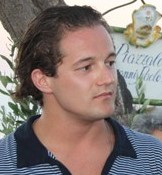 Lewis Edward Cianelli was born in New York City, New York on January 12, 1923. He was the son of actor Eduardo Cianelli [1889-1969]. Lewis worked on both sides of the camera while living in Rome and working in the Italian film industry. He was a producer, writer, film, television but worked extensively as a voice dubbing actor for several years; providing English language voices for numerous Italian B-movies.