We continue our search for filming locations for “The Mercenary”. Sergei is seen riding across the prairie where he stops on a ridge and looking through his binoculars, he sees a column of Federal soldiers lead by Alfonso Garcia who rides off to the side to meet three men on horseback who approach him. It’s Curly and two of his henchmen. They join the caravan and proceed on to Sonora. Kowalski turns his horse and rides off in the opposite direction.

This scene was filmed on the plains of outside Andalusia, Spain. 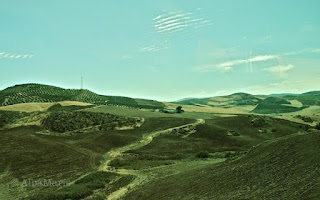