Kowalski enters Paco’s room and finds him sleeping. He lights a match and warms it against Roman’s foot and wakes him. He tells him the Regulars will soon arrive in full force. Paco tells Sergei he’ll think about it tomorrow and lays back down. As Kowalski begins to leave the room Roman asks him who is this Simon Bolivar and what does it mean to make a revolution? He tells him it is an attempt to bring the rich and poor together but Roman tells him it is impossible. 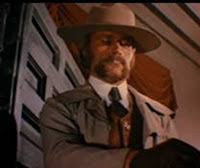 This was filmed on a sound stage in Madrid.