The Karl May Festival set a new audience record: 406,925 viewers watched “The Oil Prince”. This broke the record from 2019, but even more: The previous Karl May visitor record dates back to 1980. At that time, 404,758 people came to the Karl May Festival in Elspe to see Pierre Brice in Jochen Bludau's production of "Winnetou III". A mark that has now been broken more than forty years later.

The viewers of the last performance of "Der Ölprinz" with Katy Karrenbauer (Rosalie Ebersbach) and Sascha Hehn (Grinley, der Ölprinz) saw a largely gag-free performance - in contrast to the usual final gags in the last performance. Nicolas König, who initially brought the innkeeper Paddy to his pub, had a cameo appearance as a rider. In the 2022 season, König had filled in a wide variety of roles as a Corona representative, so he took over for Fabian Moasterios, Harald Wieczorek, Sascha Gluth and Sascha Hödl - who had to take on the Winnetou role for the sick Alexander Klaws. Unfortunately, Kalkberg GmbH Managing Director Ute Thienel failed to thank the two actors present for their additional commitment in her closing speech. 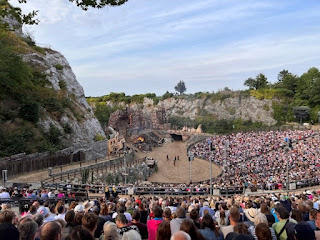 Next year's program includes "Winnetou I", a piece that was last performed in 2013 (with Jan Sosniok as Winnetou). Alexander Klaws will be seen again as Winnetou, as Ute Thienel announced. Presumably someone else will take the director's chair, because Ulrich Wiggers will be directing an open-air production of "3 Musketeers" at the Augsburg State Theater next summer.