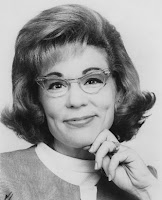 Born in Des Moines, Iowa on March 25, 1929, Gordon grew up in Chicago and attended the University of Illinois and the University of Wisconsin. Her father founded the National Barber and Beauty Manufacturers Association. After moving to New York when she was 19, she made early appearances on radio and live TV, including dramatic roles on’ Studio One’, ‘Robert Montgomery Presents’, and ‘Search For Tomorrow’.

She did extensive voice-over work, and for years, anyone who misdialed the phone got a recording she made, informing them that they had reached a non-working number. She was a dubbing artist, serving as the English-language voice of actresses including Jeanne Moreau and Claudia Cardinale.

She was one of the first women to wear her glasses while appearing as herself in TV commercials in the 1950s and 1960s.

Joyce married Bernie Gordon who was an actor and also a voice actor in 1951 and the they had two children and worked together until Benie’s death in 2004.

She was also the voice of the recorded message callers hear when dialing an incorrect phone number.

In 1966, she became the first female president of the Screen Actors Guild (SAG)'s New York branch.

The Good, the Bad and the Ugly – 1966 [English voice of Rada Rassimov]

[Thanks to Michael McQuarrie for additional input]