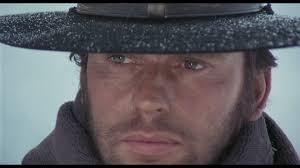 When Sergio Corbucci was putting “The Great Silence” together in 1966-1967 he wanted Jean-Louis Trintignant for his leading man. Trintignant at first declined because he didn’t feel comfortable speaking his native French language as a cowboy and he had never made a western before. To get around his objections Corbucci decided to make his star a mute. Therefore, in a flashback scene we see Silence as a young boy witnessing the murder of his parents and the killer cutting the boys vocal cords so he could never tell anyone who or what happened.