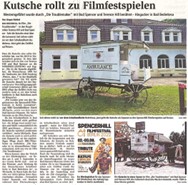 The wagon, which has been on the grounds of a school camp in Bad Bederkesa for many years as a piece of play equipment, is an original prop from the Bud Spencer and Terence Hill film “The Troublemakers”. The western was filmed in New Mexico, United States in 1994. In the film, the carriage served as an ambulance. It was, so to speak, a forerunner of today's ambulance. You can see it during a fight scene. Terence Hill lures various gangsters to the carriage, which also contains a bear that scares the thugs. 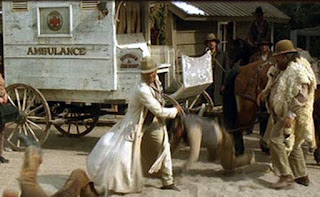 Bud Spencer and Terence Hill visited Germany for the film's premiere in spring 1995 and also made several appearances on various television shows on the occasion. They were guests of Thomas Gottschalk on March 18th when he went to his Saturday evening show Wetten Dass..? invited to Bremerhaven. In the city at the time, Thomas Gottschalk bet against the city of Bremerhaven that they would not be able to get the dance world champions Andrea and Horst Beer on stage ten years after their triumph, so that they could perform the dance from back then again. The city of Bremerhaven won the bet. The couple danced and the town received the wagon from the film as the prize for the bet. However, the wagon did not appear in the show itself at the time. It was only shown in a photo. 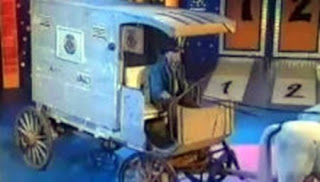 Terence comes to the studio in the wagon.A week after the show, the wagon could still be admired on German television. Terence Hill presented the film on March 24th in the children's show 1, 2 or 3 with presenter Biggi Lechtermann and was driven to the studio in exactly this wagon. After that, the trail of the wagon was lost for many years.

In September 2019, several fans of Bud Spencer and Terence Hill then met for a cinema screening of the film “Zwei Missionare” in Bremen's Cinespace cinema. Sascha Meyer from Bremerhaven was one of those fans and in a conversation, he learned there that the wagon was in the city of Bremerhaven at the time. Sascha himself still had good memories of the "Wetten dass...?" show from back then. Although he couldn't follow them live in the hall, he was lucky enough to catch Bud Spencer and Terence Hill shortly after lunch on the "Seute Deern". Now that he heard about the wagon, his ambition was aroused, and he went in search of it.

The wagon was in front of the school hostel in Bad Bederkesa. He finally struck gold with the Nordsee-Zeitung. Not only did he find a few articles about the program at the time, he also learned that the wagon was sent to the BBU (Bremerhaven employment company "Unterweser"). A reporter later got in touch and found out that the wagon had been used as a piece of play equipment on the grounds of the Bad Bederkesa school camp for a number of years. He contacted BBU Managing Director Gerret Michaelis and arranged an appointment to view the building. 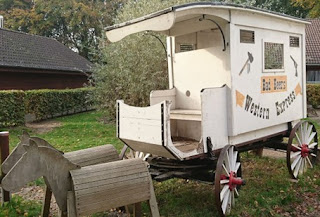 During this appointment, the idea came up to restore the carriage to its original condition, as seen in the film, and to create an information board so that the carriage and its history are not forgotten again.