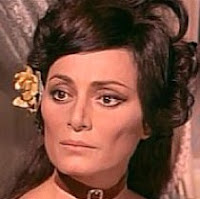 Italian actress Lydia Alfonsi died on September 21, 2022 in Parma, Emilia-Romagna, Italy, she was 94. Born Lidia Alfonsi in Parma, Emilia-Romagna, Italy on April 28, 1928. In 1946 she won in a national competition for amateur dramatics and was noticed by one of the judges, the director Anton Giulio Bragaglia, who immediately hired her for his stage company. Soon she was cast in leading roles in dramas and often in classical works, including many Greek tragedies. In 1957 she made her film debut, then in 1960 she started a professional and sentimental relationship (lasted until his death in a car accident in 1963) with television director Giacomo Vaccari, starring in several successful RAI TV-dramas directed by him. In the mid-1970s Alfonsi semi-retired, making sporadic appearances only in 1988 (with the TV movie ‘Una lepre con la faccia da bambina’), in 1990 (in “Gianni Amelio's Open Doors”) and in 1997 (in Roberto Benigni's “Life Is Beautiful”). Alfonsi appeared in one Spaghetti westerns 1967’s “Face to Face” as Belle de Winton.