Within two days, at the end of May, two major operations took place in Montegrotto Terme, in the province of Padova. The first concerns the son of the well-known Italian cartoonist Gianluigi Bonelli, father of Tex Willer: Giorgio Bonelli, entrepreneur in the hotel industry, has auctioned the Imperial Hotel. Two days later, the Commodore Hotel was bought by the Israeli fund Jerusalem Gardens Mordoch. The city in the heart of Colli Euganei seems to be in the center of investors’ interest for a relaunch of tourism and the territory.

Regarding the first deal, Corriere del Veneto reports that the acquisition took place for 980 thousand euros but for the restructuring Bonelli will have to spend 10 times as much, around 10 million euros. The project wants to bring back the 'comic cowboy' invented by his father: the Imperial hotel will become Tex Willer's hotel and will adjoin a theme park, Tex Willer World, which will stand in the 22 hectares now undressed of the former Bonetti cellar.

The architect Hans-Peter Demetz is working on the project, supported by architects Alberto Asquino di Montegrotto and Giorgio Pescatori from Milan. “Now we will open discussions with credit institutions,” Bonelli explained to the headboard. “This hotel – it went on – is crucial in the project because, apart from the important intrinsic value of the property, however it is degraded by the vandalism perpetrated, it is interesting because it is located right in front of the access road or at the Bonetti quarry. It is certainly the complementary structure that suits Tex Park the most.” Regarding the process, it will take at least eight months between permissions and planning before we can start the works, which will include an Indian village and a western village, a large natural lagoon with waterfalls and water features at Place of “normal” pools, Tex museum and a steak house. 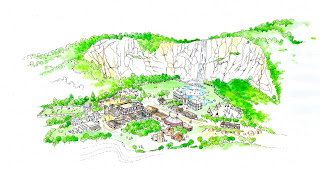