During the Cold War, both the West and East Germany film industries made popular westerns. Yes, westerns. What was that all about? 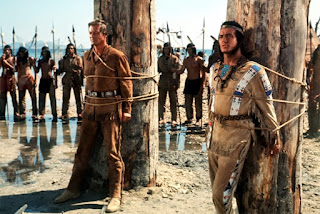 During the Cold War, both the West and East Germany film industries made popular Westerns. Yes, Westerns. Inspired by West Germany’s international success in the early 1960s with films based on the bestselling novels of Karl May, the East Germans produced equally successful Indianerfilme. As their name suggests, these Indianerfilme were orientated towards the perspective of Native Americans, at least as defined by the state film industry. The Yugoslavian actor Gojko Mitic became a big star playing Indian heroes in the German Democratic Republic.

As Gerd Gemünden notes, all movies are ideological productions of one kind or another, and in the case of the GDR, the Indianerfilme articulated an “outspoken critique of the capitalism and racism that fueled the westward expansion of the United States.” But, “not surprisingly […] the various responses of the Indian tribes to the ever-advancing Western frontier of the U.S. look like blueprints for a better socialist Germany.”

The romance of German Indianerfantasien—fascination with the American West—transcended the Berlin Wall.

Driving the popularity of such films on both sides of the Iron Curtain was the German fascination with a particular myth of the American West. To understand this, you have to go back to the novelist Karl May (1842-1912). His stories about the native Winnetou and the German Old Shatterhand are some of the most popular in the German language. May—who didn’t visit North America until late in his career, and even then never travelled west of Buffalo, NY—inspired a cultural obsession with Plains Indians in Germany. Gemünden describes it as “a common, widespread and existential identification with Indians that clearly surpasses that of other nations.” The motivation for all this, he notes, is “the desire to not only understand Indians better than others could (especially the United States), but also better than they themselves [the Native Americans] could.” Indian hobby clubs, camps, and museums in the now-united Germany are still a thing.

But back in communist party-ruled East Germany, May was out of favor because the Nazis had been big fans of him. May had been called Hitler’s “cowboy mentor” while Hitler himself had urged his generals to read May during the battle of Stalingrad. In the officially de-Nazified GDR, Indianerfilme trafficked in the world of Karl May without actually being by Karl May. 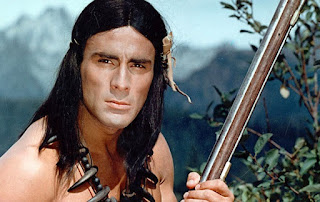 Yet the romance of German Indianerfantasien transcended the Berlin Wall. The Yugoslav Gojko Mitic was courted by capitalist filmmakers into the 1970s and eventually became a regular at film festivals across the divide. “Unser Gojko” (our Gojko) “become one of the few sincere symbols of East and West German unification.”

And for those amused by a Yugoslavian playing an Indian in East German Westerns, recall that Burt Lancaster, Rock Hudson, Audrey Hepburn, and Johnny Depp, among many other European-ancestry actors, all dressed up as movie Indians in Hollywood’s version of the Indianerfantasien.
Posted by Tom B. at 6:51 AM