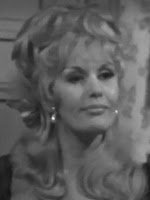 British actress Sheena Marshe passed away in a care home in Kent, England where she had lived for several years. She was 83. Born Shirley Kemp in Leamington Spa, Warwickshire, England in 1935 she was a British fashion model who hit the newspapers because she was a judoka trying to get into pictures. She and her husband Doug Robinson were partners in a London gymnasium. Sheena made her movie debut in the Spanish/British co-production “Pasaporta al Inferno (1956), in which she played a girl in the nightclub scenes. In Britain she was mostly seen in small television roles (e.g. ‘Educating Archie’, 1958) and commercials. In 1958 she landed an important role in the West End play The Trial of Mary Dugan, as a “know-all-about-men-girl”. When Jayne Mansfield was making “The Sheriff of Fractured Jaw” (1958) in Britain, Sheen was considered as Jayne’s stand-in but Jayne wasn’t pleased at all and the deal go through. She appeared in the play When in Rome with June Laverick and Dickie Henderson, in 1959. Marshe did some movies in the early sixties “Over the Odds”, “Dentist on the Job”, “The Frightened City” all in 1961 but never reached real fame. Sheena appeared as Kate Fisher in the 1966 British TV series ‘Doctor Who: The Gunfighters’.
Posted by Tom B. at 8:50 AM