50th Anniversary of Shadow of Sartana…Shadow of Death

Today marks the 50th Anniversary of the release of “Passa Sartana… e l'ombra della tua morte” (Shadow of Sartana… Shadow of Death), directed by Demofilo Fidani as Sean O’Neal and starring Jeff Cameron. The town of Silver City is being terrorized by the Randall brothers and their henchmen. The old sheriff is unable to do anything about it, so one of his deputies, proposes to hire Sartana. The famous gunslinger has a price of $12,000 on his head, but he's known as an honorable man who stands for justice. Sartana accepts the job in exchange for the removal of the bounty on his head and exterminates the gang. The film was made in six days and with no budget or story. Fidani promised to pay the actors and crew after the film was completed and released. The films is basically a display of stunts performed by the stuntmen hired (?) as actors. 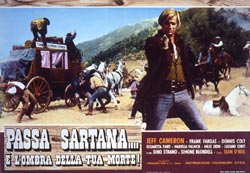