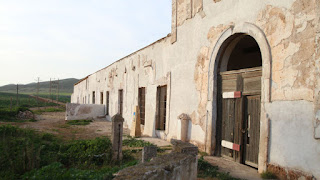 The work has derived from the general conservation project on the Cortijo del Fraile, in Níjar, have entered its final phase after many months of work on the grounds, as was verified by the technicians of the Territorial Delegation of Culture, who have carried out routine inspections at the location of Bodas de sangre which was written by Federico García Lorca from Granada.

The Andalusian Government sources have confirmed that the company Mar Menor Agricultural, owner of the BIC and surrounding land, "are performing" the work "in compliance with an execution order of the Delegation, from which they correspond" to the requirements in said order", so that" in a few weeks they will be finalized".

With a budget of about 47,600 euros, the authorized intervention contemplates the dismantling of the roof slabs which have totally or partially collapsed and the sections of interior walls with danger of collapsing as well as the recomposition of stretches of the collapsed masonry face of the exterior facades of the whole building.

Likewise, it includes the consolidation of the walls of facades and interiors by means of fissures, cracks and holes; the sealing of coronation and replacement of coatings, all with lime mortar; and the treatment with lime wash.

The intervention as a result of this project would be completed with the partial performance of lime mortar screeds for rainwater evacuation, selection, stockpiling and inventory of collapsed and disassembled materials for subsequent reuse, and land clearing, cleaning of the set and scaffolding. It is worth remembering that the entity has already carried out consolidation works in the belfry and in the main façade to stop the deterioration of the property, practically in a state of ruin, in the winter of 2015. The new works consolidate the external walls of the enclosure but do not act on those already demolished.

The Cortijo del Fraile, which also encouraged the work of Carmen de Burgos's Puñal de claveles, submitted in December 2015 to work for the consolidation of the chapel and the tower of the belfry valued at 140,000 euros, which was a turning point in the recovery of the property in order to give a cultural use to this Historic Site.

The work of consolidating the chapel, the tower and the main facade of the building were commissioned by the agricultural company that owns the property, Agrícola Mar Menor, under the requirement of the Ministry of Culture in application of the Law of Historical Heritage of Andalusia.

Since its completion, conservationist associations have called for new works while reviving the debate on the transfer, purchase or expropriation of the building.

In parallel, 'Friends of the Natural Park of Cabo de Gata-Níjar' also raised a complaint to the Office of the Andalusian Ombudsman, still unanswered, before the "political blockade" around the situation of "total abandonment and deplorable plundering" of the BIC, in which he asked him to urge the City Council, Provincial Council and Board to sign a collaboration agreement with financial endowment to ensure its rehabilitation and enhancement with cultural, civil and tourist use.

With these new works, the Cortijo shows another image. Without a doubt, the feeling of ruin has disappeared. Remember that a part of the main façade collapsed a few years ago so that the situation of ruin was more than obvious. With the new works, the facade regains its splendor. Anyway, the collapse of the Cortijo has been stopped, but it is clear that for the future it will be necessary to determine what is to be done with the property and what purpose it could be given.