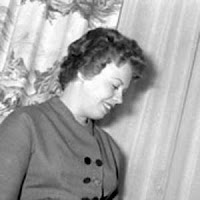 Italian film and voice actress Miranda Bonansea died in Rome, Italy on February 10, 2019. He was 92. BornMiranda Garaviglia in Mondovi, Italy on October 31, 1926, she was one of the most
famous actresses of the 1930s in Italy and then became active as a radio and dubbing actress, particularly known for being the Italian voice of such American actresses as June Allyson, Shirley Temple, Marilyn Monroe and Judy Grland. She was married from 1952 to 1962 with Italian singer Claudio Villa, from whom she had his son Mauro. Miranda was the Italian voice of Ruth Buzzi in Terence Hill's 1990 film "Lucky Luke".
Posted by Tom B. at 1:36 PM