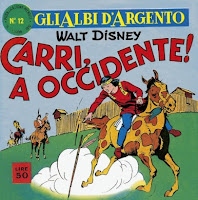 This comic book series, which echoes the most famous ALBI D'ORO in the title, publishes stories of a western setting with characters from Disney movies and TV series, taken from the comic books of Dell / Western Publishing. In the first eight issues the protagonist is DAVY CROCKETT (Davy Crockett King of the Wild Frontier), texts by Robert Ryder, Elizabeth Beecher and Del Connell and drawings by Tony Sgroi, John Ushler, Jesse Marsh; while the remaining four are dedicated to the comic versions of several feature films, drawings by John Ushler, Dan Spiegle. The covers are printed in five colors with a silver background, hence the name of the seres “The Silver Albums”.

This weekly series was first published in 1957 beginning with issue #1 on June 15, 1957 and ending with issue #12 May 15, 1958. The Silver Albums were published by Arnoldo Mondadori Editore in Milan, Italy directed by Mario Gentilini and printed by Officine Grafiche Arnoldo Mondadori Editore in Verona, Italy. Each issue was 32 pages long with 4 colored covers and black and white pages.