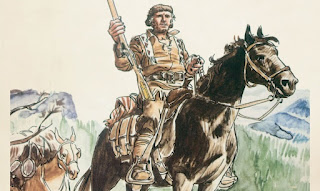 'Ken Parker' (1974), by Giancarlo Berardi and Ivo Milazzo, is a 'western' starring a trapper inspired by Robert Redford from the film 'The Adventures of Jeremiah Johnson'
The spaghetti western is a subgenre of the western that was fashionable in the sixties and seventies, characterized for being of Italian production, in contrast to the traditional films of the genre that were filmed in the USA. One of those western, although not produced in Italy but in the USA, Jeremiah Johnson (1972), with Robert Redford in the lead role, inspired the Italians Giancarlo Berardi and Ivo Milazzo to create a comic set in the Far West, starring a trapper.

Ken Parker was created in 1974, within the Rodeo collection. The series continued in its own series in 1977, when the publisher had episodes to guarantee the monthly periodicity. It was published in fifty-nine volumes of one hundred pages. The series is very famous in Italy and in the ex-Yugoslavian Republics.

The authors wanted to name the series Jebediah Baker, but the editor wanted another title. Milazzo suggested Ken, and Berardi the surname Parker (in tribute to the fountain pen brand). The editor asked to shave the protagonist, who went to the barber shop in the middle of the second episode.

Ken Parker travels through American history from 1868 to 1908, and travels geography from Alaska to Mexico and from San Francisco to Boston. It deals with the feelings of the protagonist in the face of social conflicts. The series deals with unusual themes for a western: homosexuality, drugs, death penalty, racism, ecology, man's relationship with God.

In the first chapter, Largo rifle, Ken Parker and his teenage brother head home and are assaulted by three whites who pretend to be Indians, and who kill the younger one. Ken looks for the murderers to get revenge. To do this, he enlists in the army, where he contemplates the abuses of the white man against the indigenous people. Finally consummate your revenge and kill the three murderers.

Parker hates violence, but is forced to fight against those who abuse their power, such as the band of rustlers that takes the population that gives its name to the second episode: Mine Town. The priest of Mine Town accuses Parker of not respecting the command not to kill. Parker alleges that the main commandment is to survive and that a living being must fight to defend itself. In the moment of truth, the priest abandons his passive attitude towards injustice and fights against abuses, although this ends up costing him his life.

Milazzo received help from the best Italian cartoonists to maintain the rhythm of one hundred pages per month imposed by the publisher: Giancarlo Alessandrini, Carlo Ambrosini, Renzo Calegari, Giovanni Cianti, Alfredo Castelli, Tiziano Sclavi, Bruno Marraffa, Renato Polese, Sergio Tarquinio or Franco Giorgio Trevisan and also, the Spanish José Ortiz. The publication was very erratic, but the authors preferred quality rather than punctuality. The series ended in 1984, and five years passed until the authors founded Parker Editore, which reissued and added new stories in the Ken Parker Magazine, stretching Parker's exploits until 1998, the date on which the authors split up and the series was interrupted.

Ivo Milazzo (Piedmont, 1947) is a professor at the Faculty of Fine Arts of Carrara since 1997. From his beginnings in the world of comics he collaborates with Berardi in Ken Parker (1974-1984), Tiki (1976), L'uomo delle Filippine (1980), Tom's Bar and Marvin Detective. Milazzo entered series of Bonelli as Tex, Nick Ryder and Magico Vento. He drew stories of Uncle Scrooge for Disney. Berardi and Milazzo met again to end the Ken Parker series in 2015.
Posted by Tom B. at 6:20 AM