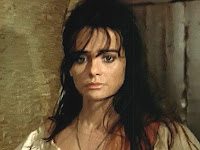 RIP Marisa Solinas. Italian model, actress, singer Marisa Solinas died in Rome, Italy on February 12, 2019. He was 77. Born Marisa Anna Solinas on May 30, 1941 in Genoa, Liguria, Italy she was the sister of singer actress Maria Sole (Maria Vittoria Solinas). Marisa made her film debut as Rosy in 1968’s “Garter Colt” starring the late Nicoletta Machiavelli. She would go on to appear in over 30 films. As a singer she debuted with "Devi Impar", a piece which was also made into a widespread film in the circuit of cinebox, the forerunner of video clips. In 1973 she posed nude for the camera of Gina Lollobrigida who immortalized her as a model for her book "Italia mia". Solinas also graced for the cover of Playman. One of her last appearances was in the successful film by Alex Infascelli "Almost Blue", in 2000, based on the homonymous novel of Carlo Lucarelli. Marisa was married to Italo Panone and is the mother of David Panone. Solinas appeared in four Euro-westerns: “Garter Colt” (1967) as Rosy; “A  Colt in the Hand of the Devil” also 1967 as Maya; “Killer, Adios” also 1968 as Sheila Simpson and “Blindman” (1971) as Margherita.
Posted by Tom B. at 11:01 AM