The Birth of the Romanian Western (part 1) 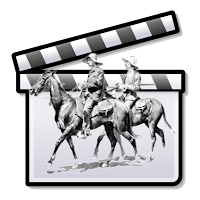 As with any illegitimate children it is really difficult to reveal the ancestors of non-American westerns. We may consider them pedantic, and therefore not take into account Charles Ford’s explorations of early cinema, which unearthed films like Indian Banquet/ Repas d`Indien (1896, directed by Gabriel Veyre for the Lumière brothers), or the 1911 Joë Hamman’s cycle Arizona Bill, proclaiming them to be ‘the first European or French westerns’. Acknowledging Giacomo Puccini’s 1910 opera “La fanciulla del West” as the first spaghetti western would be just as shocking. However, it may be acceptable to consider La Vampira Indiana (1913) among the old roots of the spaghetti western, at least because it was directed by Vincenzo Leone, father of Sergio Leone. Further on, it is difficult to pinpoint the first western film in a certain country because we should previously decide if we are going to accept only the pastiches and not the parodies and local adaptations of the genre. Robert Hossein’s films The Taste of Violence/ Le goût de la violence (1961) and The Rope and the Colt/ Une corde, un Colt… (1969) and Luc Moullet’s A Girl is a Gun/ Une aventure de Billy le Kid (1971) can be regarded as first French “modern” westerns.

If we limit our search to non-American westerns whose plots are located in Western America things get much easier. For example, with West or East German westerns it is easy, in both cases, to go back to the origins: Treasure of Silver Lake/ Der Schatz im Silbersee (directed by Harald Reinl, starring Pierre Brice and Lex Barker), produced in 1962, is the first West German western (although it is, in fact, a West German – Yugoslav - French co-production), while East Germany’s first film of the genre was the 1966 The Sons of Great Bear/ Die Söhne der großen Bärin, directed by Josef Mach, also a co-production (East German - Yugoslav). We can add that Treasure of Silver Lake was also the first western shot in Yugoslavia. Bulgaria was also a partner in such co-productions, both with West Germany (1965, Legacy of the Incas/ Das Vermächtnis des Inka, d. Georg Marischka, a film also co-produced by Spain and Italy), and with East Germany (1971, Osceola, d. Konrad Petzold, a production in which Cuba was also involved).

All of the westerns or related films made in the 1960s mentioned above, along with a lot of other genuine American westerns, have been shown in Romanian movie theatres. We can even detect Sergio Leone’s influence on both the Transylvanians’ and the Mărgelatu cycles of Romanian western inspired films, even only because the main characters John Brad (played by Ovidiu- Iuliu Moldovan in the Transylvanians’ cycle), and Mărgelatu (played by Florin Piersic) have unshaven faces, undoubtedly reminding of Clint Eastwood in Leone’s films. However, without denying the influence of previous foreign productions, Romania’s foreign policy in the seventies might have actually played the decisive role in the birth of the three Romanian westerns made between 1979 - 1982.

The Czech film Lemonade Joe had been a parody not only of the western genre, but also of multinational corporations and the Western way of life. Like other communist countries, Romania also made films whose plots were located in the West. Two such films were produced in the early sixties: A Bomb Was Stolen/ S-a furat o bombă (1961, d. Ion Popescu- Gopo), and The Famous 702/ Celebrul 702 (1962, d. Mihai Iacob). Both have plots which are typical for crime films, but there is also an ideological aspect, and both films can be also seen as satires of the West. However, this ideological war was quickly and almost entirely abandoned in Romania, at least in fiction films.

Beginning with 1965, even before turning into a tyrant, Nicolae Ceauşescu left his mark on Romanian society. In 1965, on the occasion of the Ninth Congress of the Romanian Communist Party, he declared the end of socialist realism as the one and only artistic approach validated by the party, encouraging the exploration of the whole “diversity of styles”. Indeed, a short “thaw” followed, whose liberalism was beneficial for all forms of expression, including cinema 8. However, there was also a negative side to this strong personal influence Ceausescu had on all aspects of society, and this negative side finally prevailed. Although generally after 1968 Romanian culture enjoyed greater freedom, in cinema things were a bit more complicated. For instance, Ceauşescu loved the historical character Vlad ‘the Impaler’ so much, considering him a national hero, that he could never accept any horror parodies on Dracula. Not subjected to such restrictions, the Czech director Oldrich Lipský could turn Jules Verne’s novel Castle in the Carpathians into a charming horror parody with his film The Mysterious Castle in the Carpathians/ Tajemství hradu v Karpatech (1983), while Romanian Stere Gulea, in his Castle in the Carpathians/ Castelul din Carpaţi (1981), could only turn it into a painfully flat political film. The only time Dracula was mentioned in a Romanian film in the 1970s was in the documentary Dracula: Legend and Truth/ Dracula, legendă şi adevăr (1973, d. Ion Bostan), a film targeted at foreign tourists, which aimed only to explain the relationship between the historical figure of Vlad the Impaler and the legendary vampire Dracula. The only parody on Dracula accepted on the Romanian screens during communism was Oldrich Lipský’s film which subtly alludes to the legend.