At One With the West in Villamuriel 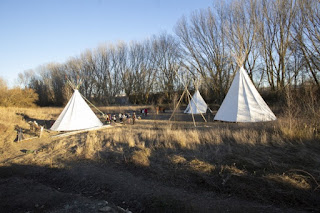 Next to a bend of the Carrión River, in Villamuriel, the Cree Indians share their days with the cowboys and their horses, as well as some firefighters from the BRIF, several members of an equipment company of props, recording... etc. Because in a bend of the Carrión, Javier Galán rolls an audiovisual that aims to promote conservationism, based on the legend of Los Guerreros del Arcoiris.

"What is intended is to change the conception and raise awareness of the need to care for the environment," says a firefighter from the Forestry Brigades of León who is part of this project. The union between Galán and this project comes hand in hand after the production of the documentary BRIF, the story of a struggle. But in this conservationist work they collaborate more. In addition to the filming team that has a documentary maker who has been nominated for the Goya Award, to the owners of the firm Clantipi, who have ceded the Indian stores for the recording as well as for the shelter of the filming members; to the regents of the swimming pool of Villamuriel, passing through a French country singer, and the Town Hall of the town.

The idea was to finish filming yesterday, after having been producing material throughout the week, but the activities that go hand-in-hand with the recording of this project will continue throughout the weekend, in this case already at the swimming pool facilities. Villamuriel
There you can see the tipis of Clantipi, a Palencia company that has collaborated in several shoots at this time and in promotions such as one of the Atlético de Madrid; Tracking techniques will also be shown by North Explorer and Seraflo; and there will be workshops on lithic sculpture, fire research and experimental archeology. There will also be the presence of Basque aizkolaris who will demonstrate the cutting of trunks, and tonight, the collective Sad Hill, which tries to recover the cemetery of El Bueno, the Ugly and the Bad, will present its project Camino a la nominación Goya The music will be by the Fre16 nch singer Didier Methirier.
Posted by Tom B. at 7:54 AM