SW Trivia ~ The Wing and the Wang 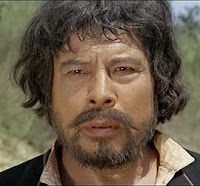 One of the most interesting actors in the Euro-western genre was George Wang, whose reaal name was Wang Chunyang. He was born in Liao Ning Andong Province, China in 1926 and got his start in the Chinese film industry before he was involved in a Chines produced movie that was filmed in Italy. He was so taken aback by the country and was immediately found himself in high demand as one of the only Oriental actors available to play villains. He wound up appearing in more than a dozen Spaghetti Westerns. He moved to Hong Kong in 1978 and started a film production company there. George died of a heart attack in 2015 at age 96.
Posted by Tom B. at 3:15 PM