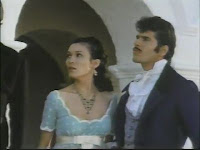 While studying in Spain, Don Antonio de la Cruz is asked to return to his native California by his ailing father. Upon his arrival, he discovers the Alcalde is ruling the province as a tyrant and his soldiers murder anyone who dares to challenge his authority. The people's only hope is the legendary hero, Zorro aka Don Diego de la Vega, whom Don Antonio finds mortally wounded after rescuing innocent men from the Alcalde's firing squad. Zorro/Don Diego urges Don Antonio to assume his secret identity and rally the Californians to fight the iron-fisted rule of the government. Don Antonio is also bethrothed to the wealthy señorita, Doña Maria Costanza Arellaga, in which they do not get along but their romance is hinted when Don Antonio assumes the role of Zorro.

This is an alternate pilot to the Duncan Regehr Zorro TV series. Patrice Martinez plays a wealthy señorita named Maria who bears the title of Doña. Patrick James portrays Don Antonio who becomes the successor to Don Diego as Zorro. Felipe also can speak and hear. The pilot was filmed in Almeria, Spain.