Who Are Those Guys? - Jack Brami 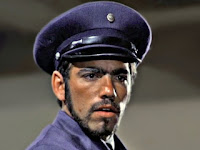 Jack Brami was born Gerald Alan Gelsner in Fairfield, Connecticut on October 2, 1943.  Brami’s biography is rather sparse. Even his obituary gave only the basic information of place of birth and date, death  place and date and a list of his immediate family. Brami made two appearances in films and two on television series all in the late 1960s and again in the late 1970s. Among which was his role as a Mexican bandit in the Euro-western “A Talent for Loving” aka “Gun Crazy”. Jack died in New Port Richey, Florida on September 25, 2012.