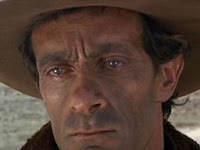 Spanish character and supporting actor Saturno Cerra died on December 5, 2015 in Sebreño, Asturias, Spain. He was 91. Born on November 25,1924 in Ucio, Ribadesella, Asturias Spain. He wandered around the world from the age of 15 painting and appearing occasionally on TV soap operas in such remote places as Brazil. Finally he turned up in Almeria, Spain during the heyday of the Spaghetti westerns and found his niche. He appeared in 13 Euro-westerns from “7 Guns for the MacGregors” in 1967 to “Kill the Poker Player” in 1972. He’s best remembered for his portrayal of Johnny MacGregor in the MacGregor films, the bounty hunter accompanying Frank Brana and Al Mulock in the opening scene of “The Good, the Bad and the Ugly” and as “One Eye” in “Johnny Yuma”.
Posted by Tom B. at 6:47 PM