May 8, 1946 began publication SALGARI - WEEKLY GREAT ADVENTURES (8 pages in large format type "journal", 25 X 35), Ed. The New Library, Milan. There were a total of 30 issues printed and the comic book ran until January 17, 1947. Art work was furnished by Walter Molino while the stories were written by Emilio Salgari. 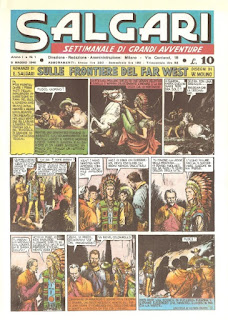 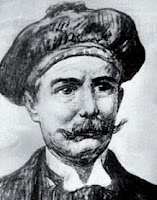 Emilio Salgari was born on August 21, 1862 in Verona, Lombardy–Venetia. He was an Italian writer of action adventure swashbucklers and a pioneer of science fiction.

For over a century, his novels were mandatory reading for generations of youth eager for exotic adventures. In Italy, his extensive body of work was more widely read than that of Dante. Today he is still among the 40 most translated Italian authors. Salgari wrote more than 200 adventure stories and novels, setting his tales in exotic locations, with heroes from a wide variety of cultures. He gained inspiration from reading foreign literature and newspapers, travel magazines and encyclopedias, which he used to portray his heroes' worlds. He wrote four major series: The Pirates of Malaysia; The Black Corsair Saga; The Pirates of Bermuda; and a collection of adventures set in the Old West. He was the creator of Sandokan. Salgari’s heroes were mostly pirates, outlaws and barbarians, fighting against greed, abuse of power, and corruption. Many of his most popular novels have been adapted as comics, animated series and feature films. He is considered the father of Italian adventure fiction and Italian pop culture, and the "grandfather" of the Spaghetti Western.

Walter Molino was born in Reggio Emilia, Italy on November 5, 1915 and was an Italian comics artist and illustrator. He made his professional debut as illustrator and caricaturist in 1935, collaborating with the newspaper Il Popolo d'Italia and the children's magazines Il Monello and L'Intrepido. In 1936 he started working for the satirical magazine Bertoldo, and in 1938 he debuted as a comic artist with the series Virus, il mago della Foresta Morta, with texts by Federico Pedrocchi. Still with Pedrocchi he created the comics series Capitan l'Audace for the magazine L'Audace, Maschera Bianca, and a number of other characters.