A Monastery in Ruins 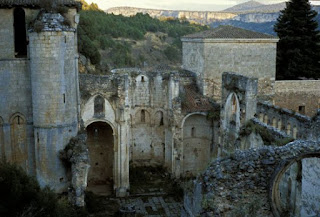 [The ruins of the monastery of San Pedro de Arlanza, where a scene from ‘The Good, The Bad and The Ugly’ was shot.]

The scene in which Blondie (Eastwood) recovers from his desert crossing at the Mission of San Antonio was actually shot inside the Monastery of San Pedro de Arlanza, within the municipal limits of Hortigüela (Burgos).

The imposing stone complex, which dates back to the 10th century and was once a major power center in Castille, functioned as a monastery until the early 1800s. Since then, parts of it have been stripped away and taken to a number of museums, including the Metropolitan in New York. What's more, thieves have made off with whatever they could, explains a local guide. As late as 1981, national authorities were even considering building a dam over it.

Although a restoration effort is underway, much of the site remains in ruins. Asked about the part of the monastery where the movie scene was shot, the guide explains that it is currently off limits: in the 50 years that have elapsed since then, this section has deteriorated so much that it now poses a danger to visitors. 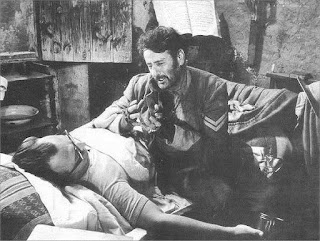