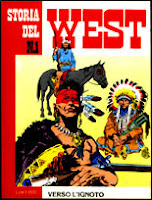 Young Brett MacDonald, arriving in America towards the beginning of the nineteenth century, takes part in the famous Lewis and Clark expedition which made its way through the uncharted lands of North America and eventually reached the shores of the Pacific Ocean, opening up the West to the thousands of adventurers who would radiate outwards to conquer new territory. After meeting and marrying the Indian girl Sicaweja, Brett decides to stay in the unspoilt lands of the West. The couple later dies in the siege of Alamo, leaving a son, Pat, who, together with his own children, eventually becomes the focal point of all the salient events of this epic saga of the Far West.

A saga which, in this comic strip version, appeared for the first time as part of the Collana Rodeo, subdivided into seventy-three highly exciting episodes. Brought to its conclusion in 1980, the series was reprinted in 1984 in a new version, which presented all the original episodes, revised and corrected, as well as two entirely new stories (at the beginning of the great saga), thereby giving greater scope to historical events that had previously been treated somewhat superficially. The aim of this complex historical fresco - an aim which it most certainly accomplished - was to offer a fuller and truer picture, albeit within the limits posed by fictional narration, of an era that both the world of comics and cinema usually address (or rather, used to address) in a fairly superficial and convention manner (at times, even with a partisan spirit).

The script for the entire work was composed by Gino D'Antonio, while the artwork was contributed by some of the most highly skilled Italian professional illustrators, including D'Antonio himself, Renzo Calegari, Renato Polese, Sergio Tarquinio, Giorgio Trevisan and the Spaniard Luis Bermejo. 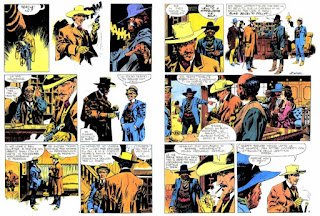 Gino D’Antonio was born on March 16th, 1927 in Milan, Lombardy, Italy. He was one of the biggest Italian comic book authors and one of the few with a complete skillset, talented both in scripting as in drawing.

He started his career in the comic book field in 1947 with a series set in Africa, both written and drawn by him called “Jess Dakota”.

He returned to “Il Vittorioso” at the drawing board, creating the history of King Arthur, written by Mario Leone.

In 1955 he met Rinaldo D’Ami who introduced him to the overseas market, where he worked for Fleetway, drawing histories set during war time, later published in Italy by Dardo.

Following Fleetway war stories, he added sporadic collaborations with the magazine “Audace”, where he works on stories of “I Tre Bill” and “El Kid”.

D’Antonio's British period lasts more than ten years, ending in 1966 with the comic book versions of some literature's classics like Charles Dickens' “A Tale of Two Cities”, Jules Verne's “Twenty Thousand leagues under the sea”, and Herman Melville's “Moby Dick”, published between the pages of the “Tell Me Why” magazine.

1967 was the year in which Gino D’Antonio created the most important (and lengthy) work of his career the “History of the West” (“Storia del West”), published by Sergio Bonelli (at the time called Editoriale Cepim), chronicling the days of the New Frontier as seen thru the eyes of a family of Irish pioneers, the MacDonalds, whose personal stories cross with the historical events of the american eight hundreds.In this work, D’Antonio is “backed up”, for the graphical part, by great talents from the comic book industry such as Renzo Calegari, Sergio Tarquinio and Renato Polese.

In 1970 he started working for “Il Giornalino”, a magazine where he created several characters, like “Susanna”, “Jim Lacy”, “Il soldato Cascella” and, together with Ferdinando Tacconi, a series dedicated to World War II titled “Men with no Glory”, later published by Edizioni L’Isola Trovata. For Sergio Bonelli Editore, he also set up a peculiar western project that often shifts towards comedy: “Bella & Bronco”. He works as a scripter and as an artist for several volumes of the series Un Uomo un’Avventura and then, with Tacconi again, he created the series “Mac lo straniero”, published in the pages of the  “Orient Express” magazine.

Between the end of the 1980s and the beginning of the 1990s he kept on working for Sergio Bonelli Editore, scripting several stories for “Nick Raider” as well as a “Julia” adventure. In 2006, besides being awarded the Gran Guinigi as Maestro del Fumetto by the jury of Lucca Comics & Games, he completed "Bandidos!", a lengthy volume drawn by Calegari, hitting the newstands in July 2007, and pens a Tex adventure for the 22nd Tex Speciale, with art by Lucio Filippucci, published in 2008. Gino D’Antonio died in Milan on December 24th., 2006.