Tabernas, Abla and Abrucena welcomes the shooting of the western 'The Price of Death'


The film, directed by Danny Garcia, has a star filled cast with actors of the stature of Ken Luckey, Crispian Belfrage and Aaron Stielstra

Oasys (Mini Hollywood) in the town of Tabernas, Gádor, Abrucena and Abla have welcomed the filming of the Western entitled The Price of Death. 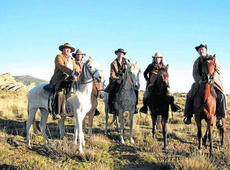 The film is directed by Danny Garcia and is produced by Danny Garcia and Cesar Mendez. The Director of Photography is Chip Baker and the art direction is provided by Paola Rowid. The camera operators are Christian Pujola and Lucy Yang. The production manager is Pedro César Artero and coordination of the stunt action was undertaken by Almeria’s Juan Manuel Torres.

Danny Garcia, director of the film praises Almeria for its places for filming. "To shoot a western there is no better place in Europe than Almería, which has been known before Sergio Leone rolled here. The other option was to go to Las Palmas but I’ve spent years working in this area and so it made no sense to go elsewhere. In addition, the script was written with many of the locations in mind so we really could not film anywhere else."

The Price of Death is a western produced by Chip Baker Films (Producers Cesar Mendez and Danny Garcia) and is starring Ken Luckey, Crispian Belfrage and Aaron Stielstra. The three were part of the team for 6 Bullets to Hell. Luckey is a young actor from Dallas who lives and works in Hollywood where he has appeared in TV series like True Blood, Mad Men, The Mentalist, etc.

His character is Kid Coffin, a former gambler who becomes a bounty hunter and receives an order to transfer a criminal named Harry Skinner (played by Crispian Belfrage) to the prison in Santa Fe unaware that a former associate of Skinner, the outlaw Dick Dixon (Aaron Stielstra) is also in pursuit of him.

Crispian Belfrage is a London resident actor and also works in Hollywood where he has worked in several westerns such as Doc West, West of Thunder and The Donner Party before starring in 6 Bullets to Hell, a film which incidentally will soon be accompanied by a video game.

Aaron Stielstra is a Detroit-born actor who lives in Milan. Besides being an avid western fan, particularly the Spaghetti Westerns filmed in Almería, Aaron is also part of the writing staff of The Price of Death.

Danny Garcia wants to have the film ready for summer 2016 and a premiere at international festivals. Garcia said, "The shooting was very good, we were in Oasys-Mini-Hollywood four days, and in Gádor in Abla and in Abrucena and were lucky that the weather accompanied us in the 18 days we were in the area."