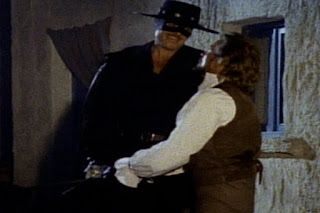 The Alcalde of pueblo Los Angeles promises the peons a direct route to San Pedro, the Ramon highway, but press-gangs 'recruits' to build it. When don Alejandro rides off to complain to the territorial governor in Monterrey, sergeant Mendoza is ordered to stop him. Zorro rides to distract the lancers, but gets shot and falls into a canyon, at first sight dead. When Toronado comes home alone, Felipe follows him and climbs bravely down. Too badly wounded to get up, Zorro reminisces how it all started, after his studies at the University of Madrid and fencing lessons with Sir Edmond Kendall, then recalls meeting Alcalde Luis Ramone.

This was the pilot episode for the 1990-1993 TV series which was filmed in Spain. It fills in gaps of the Zorro story usually not included in other series and films made about the early California hero. It was filmed in 1989 with the series originally entitled "Zorro, The Legend Continues" (or "El Zorro" in Spanish) and featured 24 episodes with Patrick James as Zorro for Caracol Television. Then from 1990 to 1992, the series was revamped as "Zorro" with Duncan Regehr for The Family Channel.